On a recent trip to Seattle over the summer, we wanted to visit as many things as we could.  We decided it would be fun to check out the Museum of Pop Culture, located right at the Seattle Center.  It is easy to find, and you can visit lots of other popular attractions nearby (like the Space Needle).  The building is really interesting, and you can’t miss it! 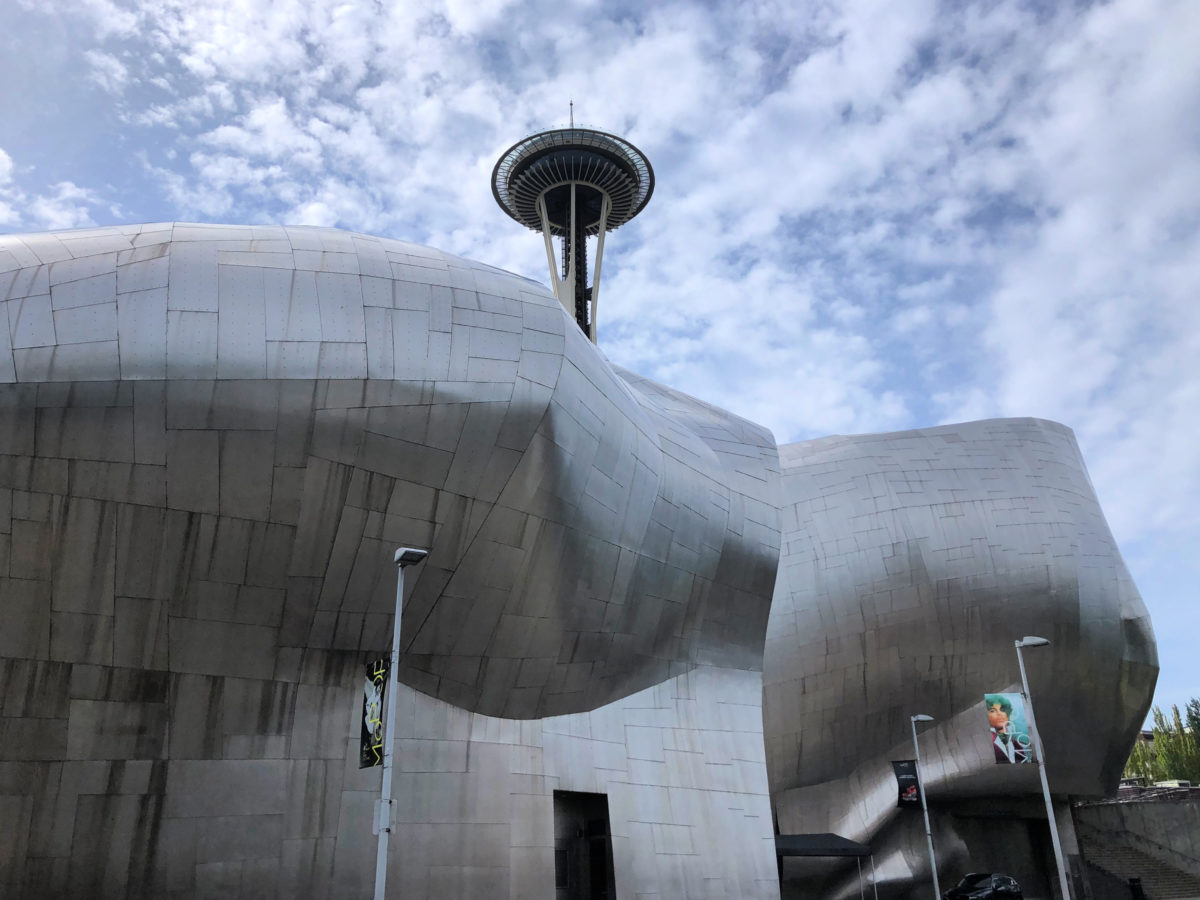 We had no problem getting there or parking.  You can also purchase tickets ahead of time online, so there is no waiting in line. 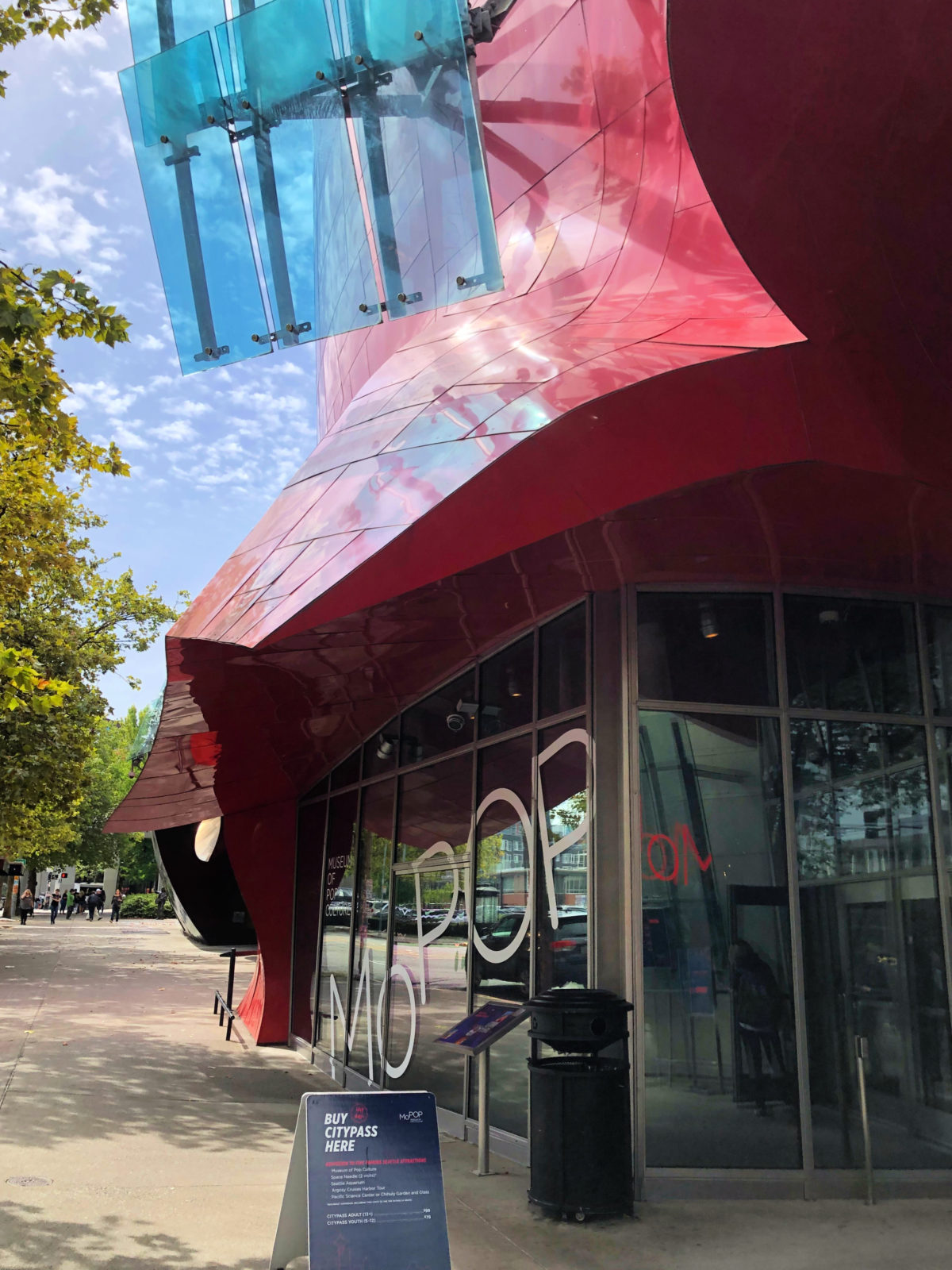 There are quite a variety of exhibits here, from a Prince exhibit to a Horror exhibit. The exhibits are always changing, and I recommend checking online if there is something of interest that you want to see.

Some of the exhibits we got to see on our trip there in August 2019 included: 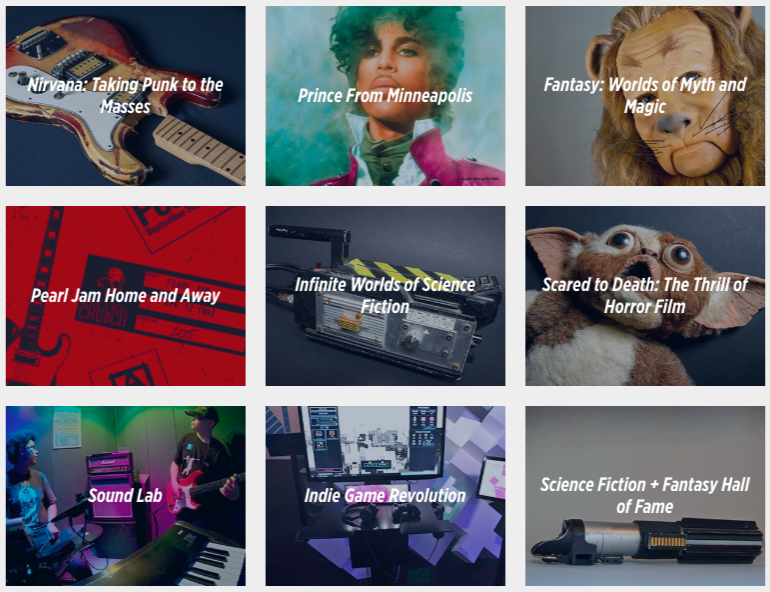 One of the first things we saw was this massive, very impressive column of instruments. 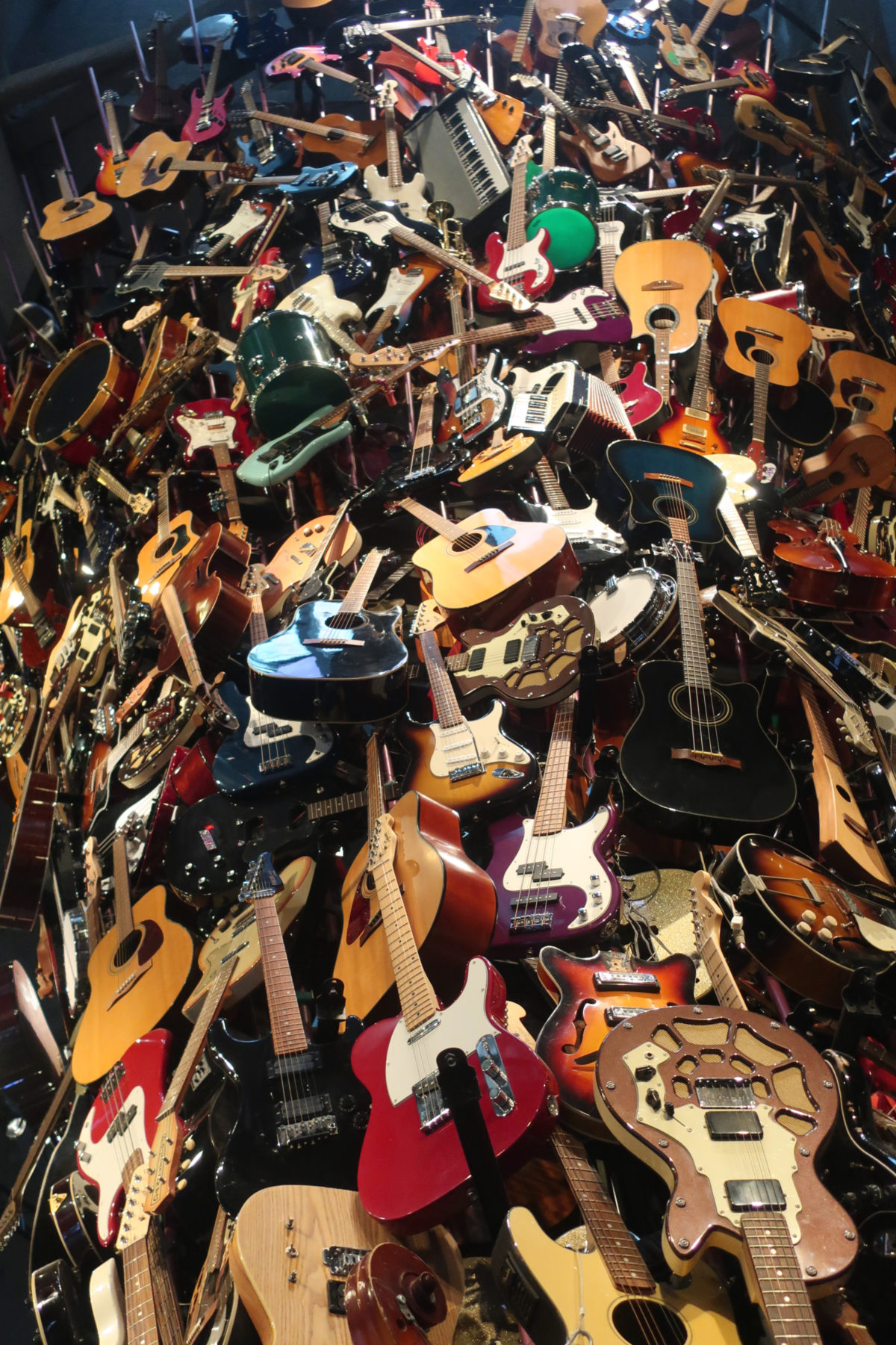 We checked out the video game exhibit, which had some interesting and interactive displays.  The visuals in this room alone are pretty cool.  The kids had fun here, but were bummed to miss out on the upcoming Minecraft exhibit (opening late October 2019). 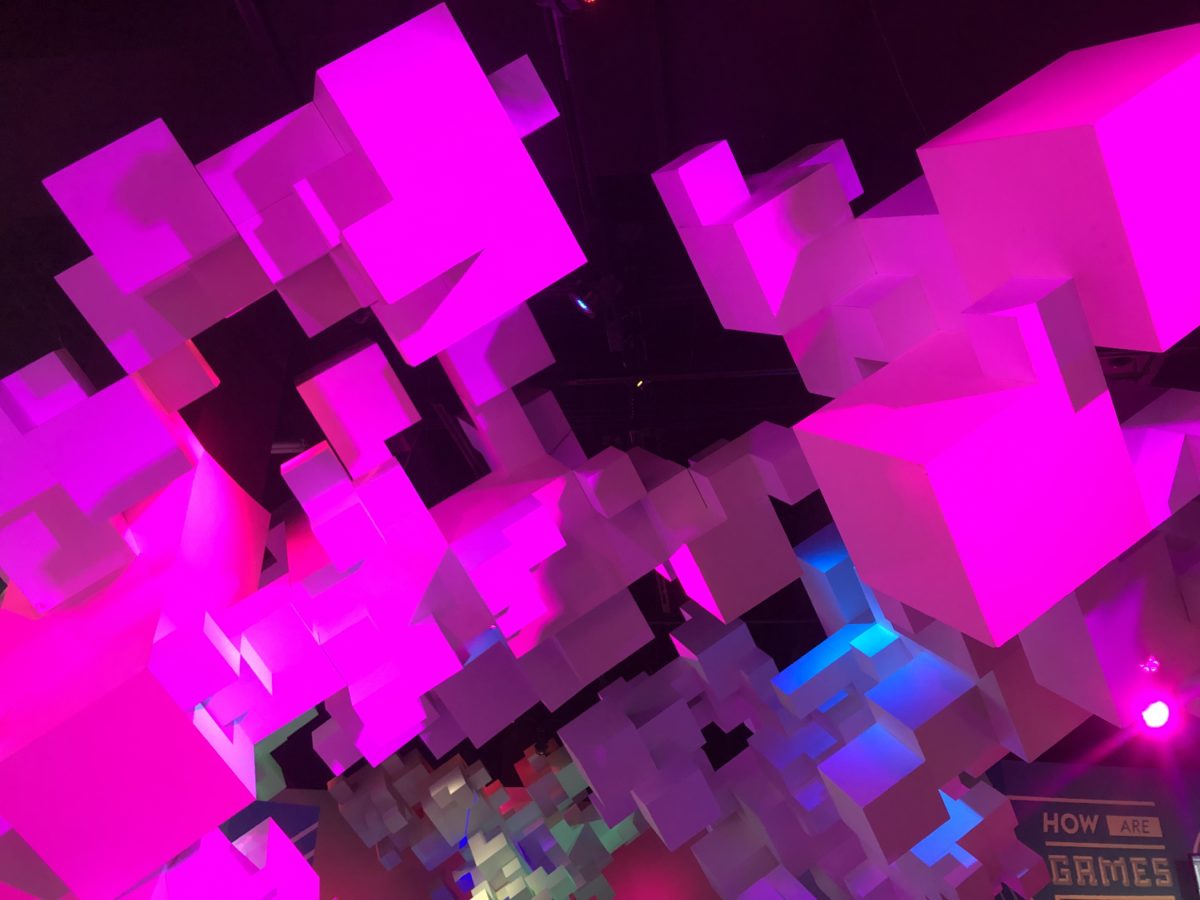 My 12-year-old wanted to check out the Thrill of Horror Film exhibit.  The kids were hesitant, but since no one was exiting screaming, decided to go in.  I am not much into horror, but I took my daughter through the exhibit.  It is actually not horrifying – as in, nothing jumps out at you (fortunately!).  There were actually lots of films I could relate to (Alien, Walking Dead, Gremlins).

The first thing we checked out there were all the hanging “dead bodies”. 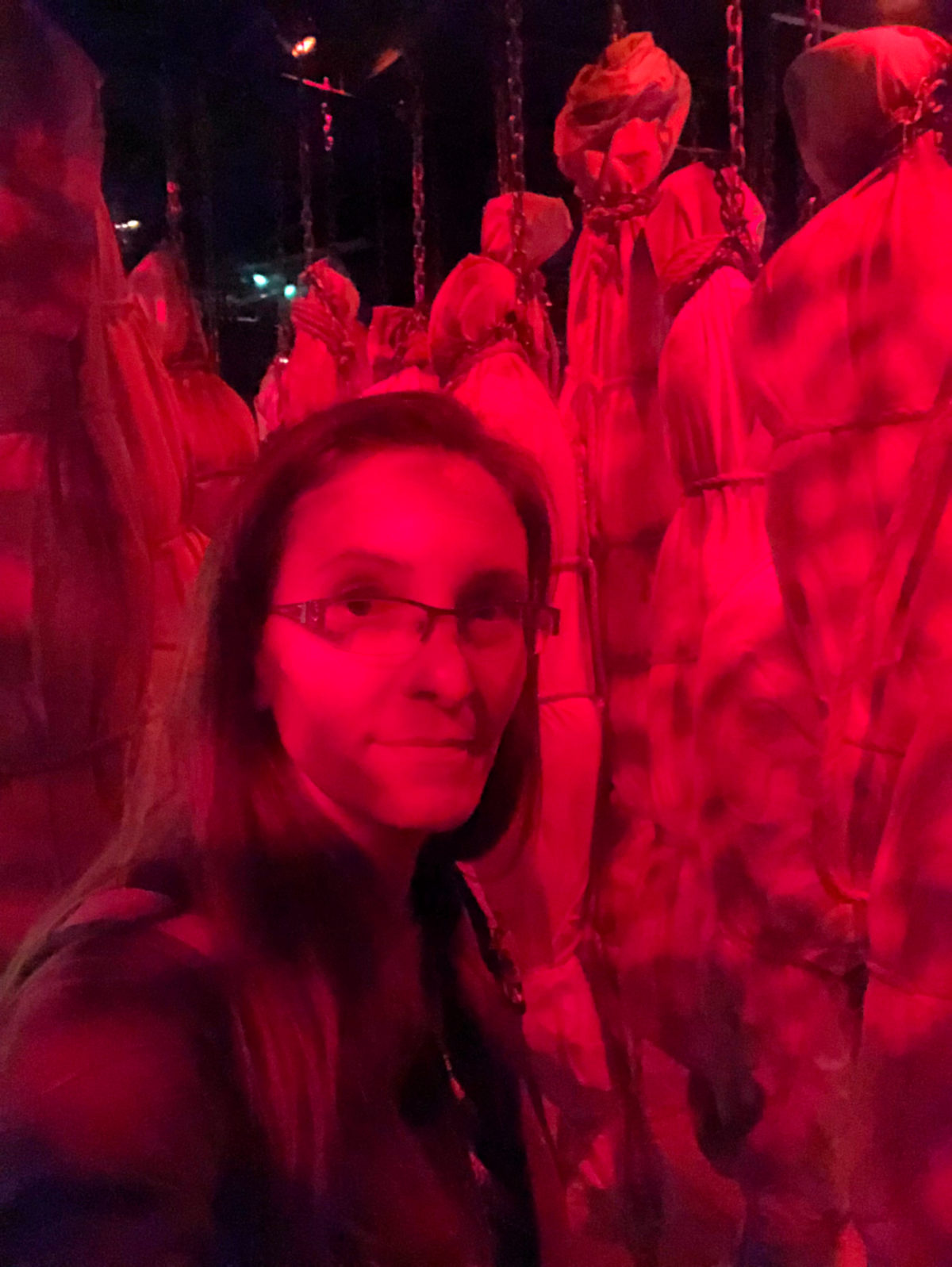 I am a fan of the Walking Dead, so I enjoyed seeing some exhibits from the show.  I remembered this specific scene in particular, which is neat to see the show brought to life. 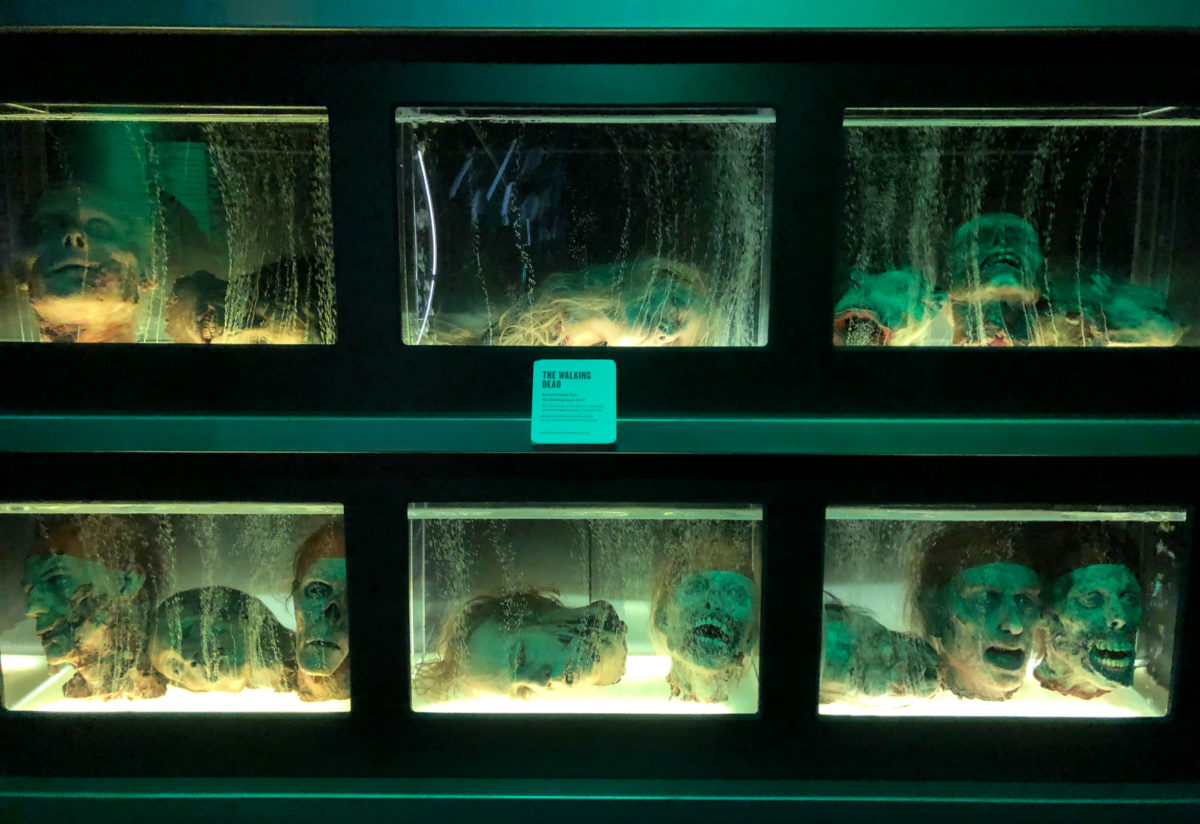 Later, my younger daughter got the courage to go check out the exhibit, at least to see a Gremlin from the set of the movie.  It was fun that both of us could relate to the Gremlin film, since the movie is from 1985, and in most cases, the kids would have no idea about it. 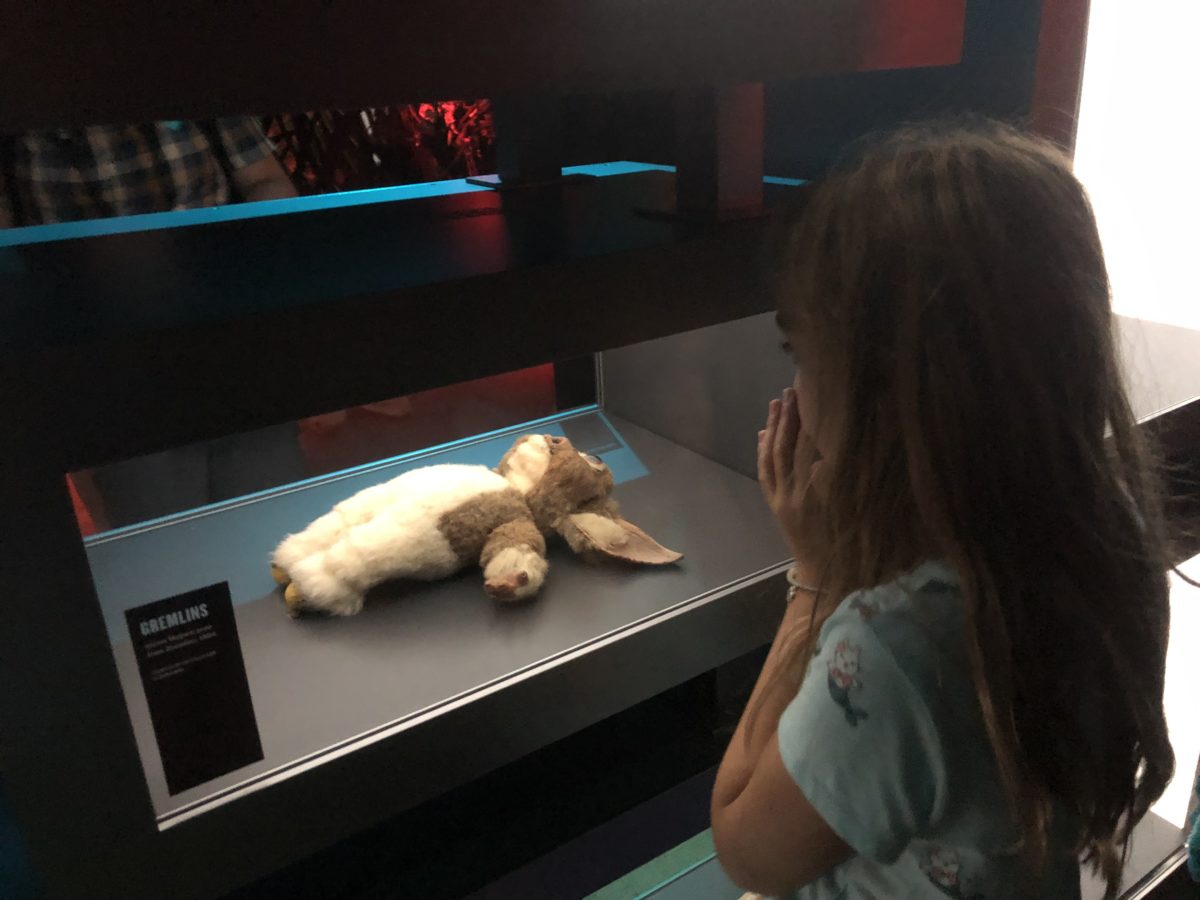 There are of course, lots of music-related exhibits, like tributes to musicians and groups like Pearl Jam and Prince. 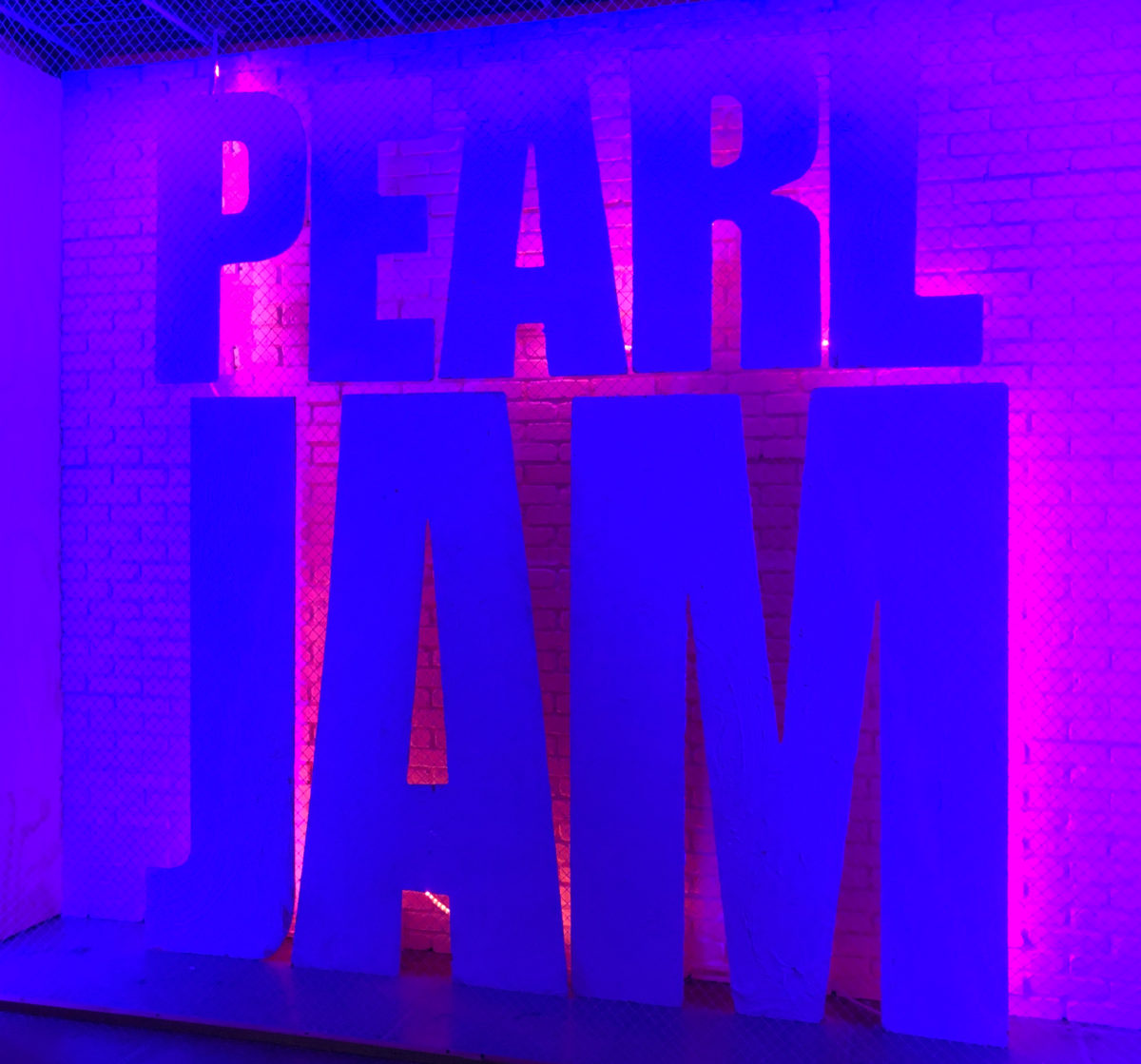 There are so many film and pop culture references, it was fun to walk through and be reminded of all these different characters and movies.  It was also cool to see various props, outfits, and so on from different places. 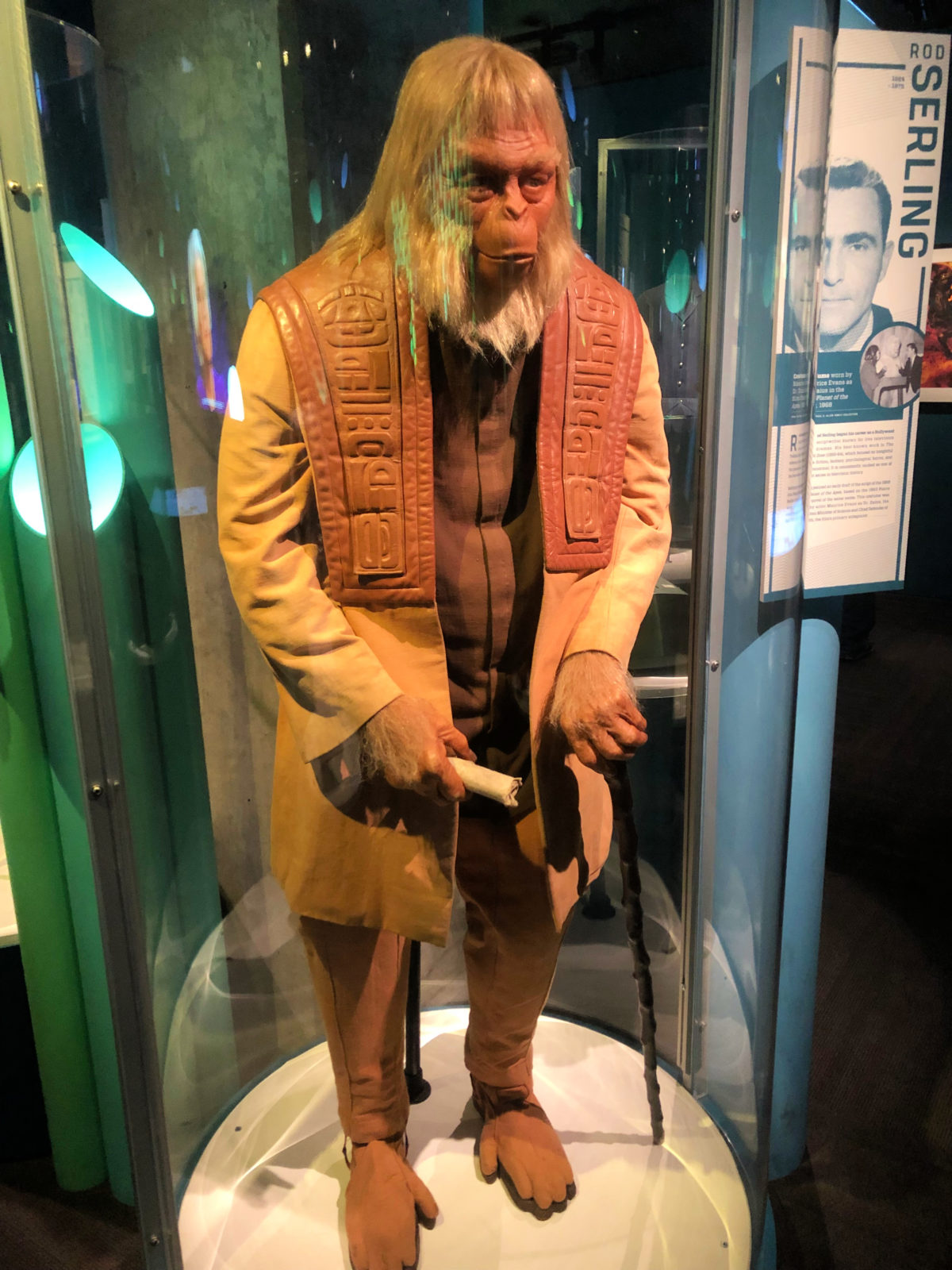 The fun thing about the Museum of Pop Culture is that most of the exhibits really took me back – it was a nice trip down memory lane of all these films and music from over the years.  How about these hoverboards from the movie Back to the Future?! 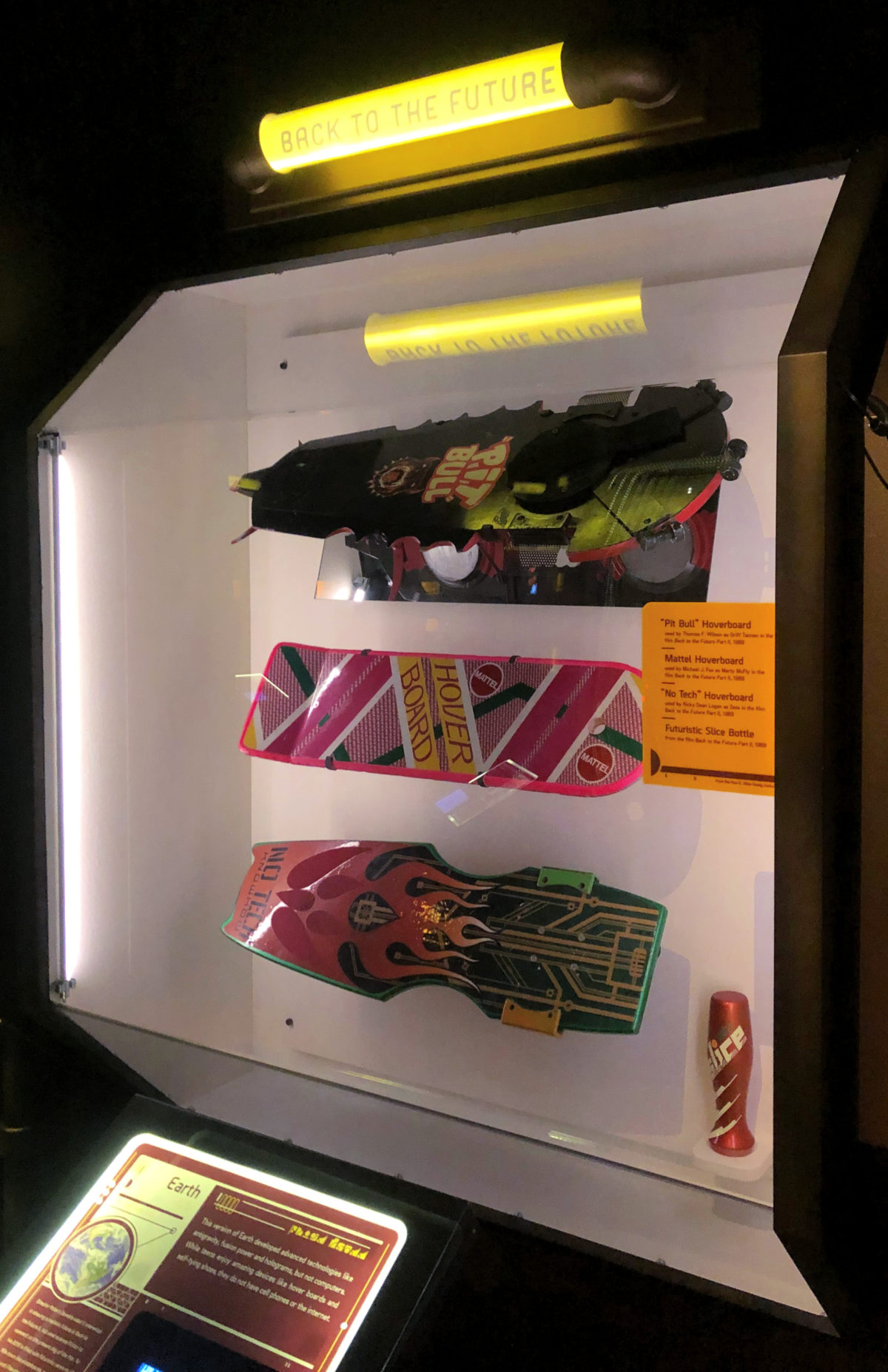 My kids are 9 and 12, so much of the museum contained references that they were not familiar with, but had fun regardless. Their favorites were the Fantasy Exhibit and the Horror Film Exhibit.

My favorites were the Science Fiction and Horror Film Exhibit, but I enjoyed perusing all of the different parts of the museum.  This is a fun place to visit, especially with all those rainy days in Seattle!

Visit the Museum of Pop Culture at https://www.mopop.org/

You can also get a Seattle City Pass, which is a great way to see a lot of Seattle sights for a great price.