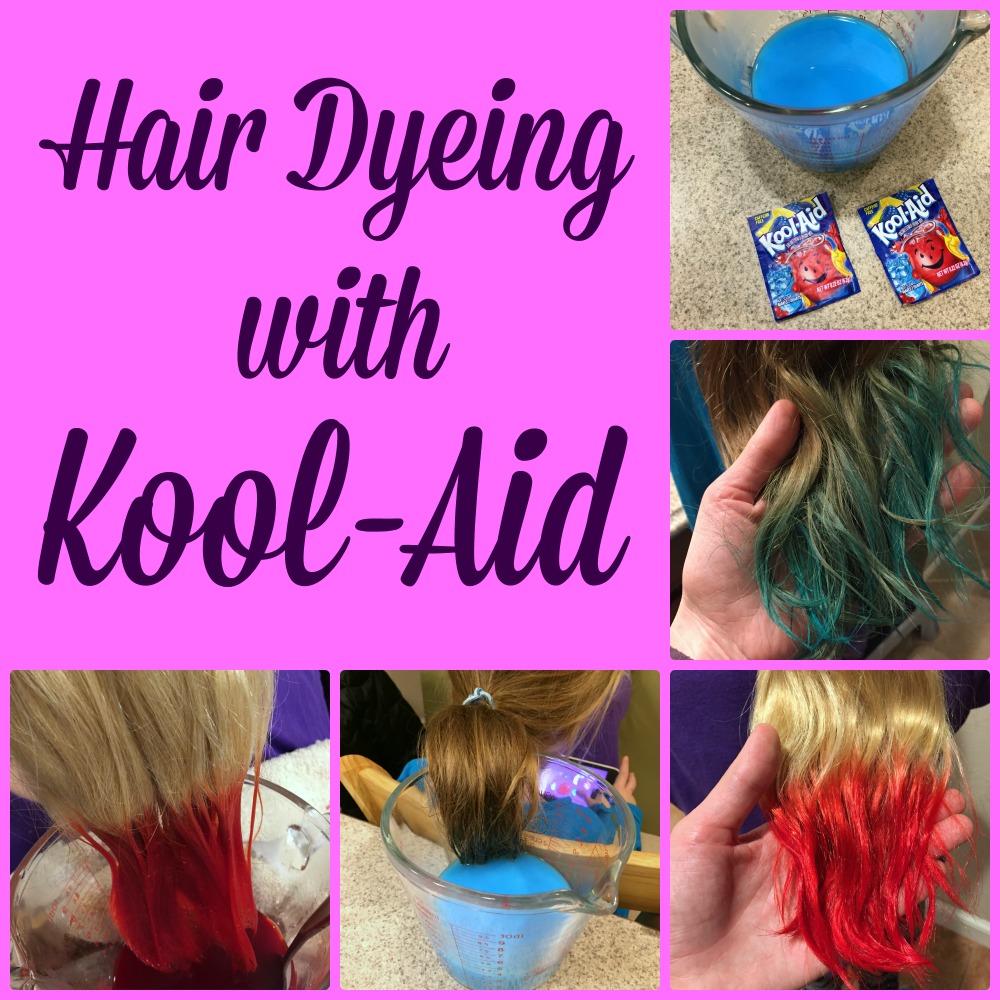 Last year, my daughter and her friend decided they wanted to dye their hair with Kool Aid.  And while it was something I had heard of, we hadn’t tried it before – but the whole process was very easy.  We have done this several times since!

2 packets of Kool Aid (packets only, not the kind that comes with sugar added!)

Old towel and/or old shirt to protect things from dye, and paper towels

Container to hold the dye

Start by simply dissolving the dye in water.  We did 2 packets in 2 cups of hot water.

I mixed the Kool Aid and hot water in a glass measuring cup, but you can use whatever works for you.  Our friends used a travel mug.

Both of my girls have very long hair, and brushed their hair thoroughly.  If you put it in a ponytail or pull it to the side, keep in mind that the dye may not come out in a straight line.

Dip the desired amount of hair into the dye.

For my daughter with brown hair, we left the dye on for 1/2 hour, and the color still came out light.  I didn’t feel like leaving it in longer would add a lot of color.  The blue also faded faster than the red (below). 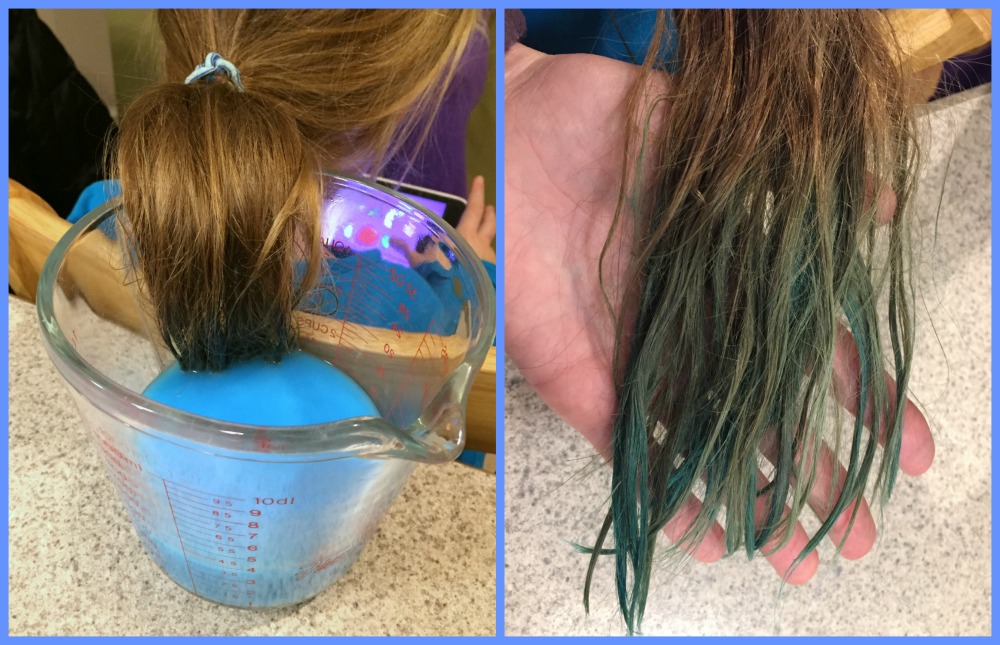 On my older daughter’s blond hair, the dye took right away.  Just a few minutes in, the red was clearly vibrant on her hair. 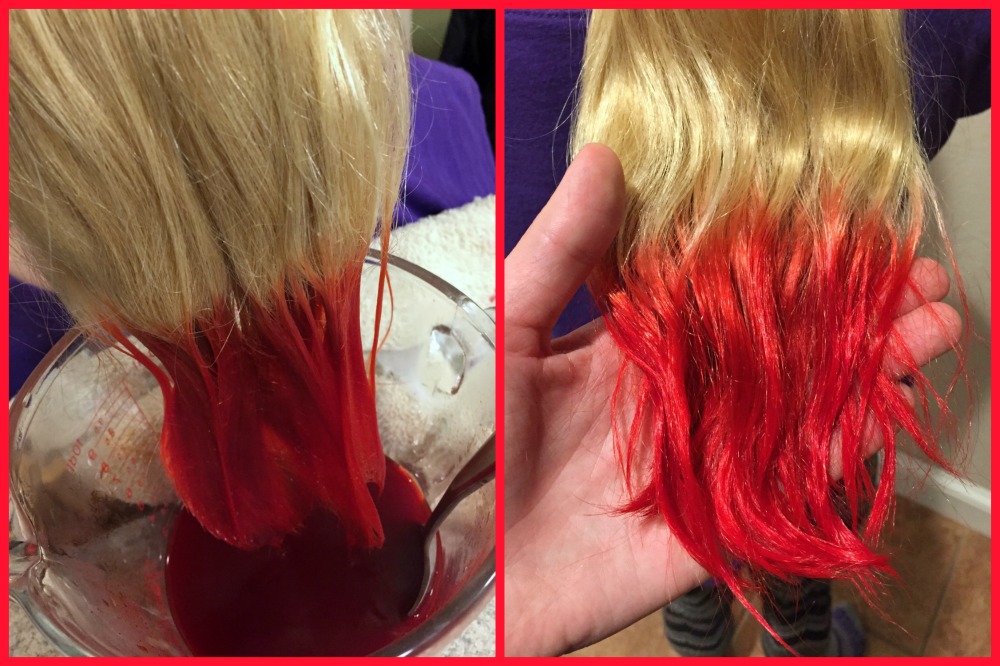 I do think RED is the strongest of the colors, and the lighter your hair, the more any color will stain it.

Once we were done dipping the hair in the dye, I blotted with a rag or thick paper towel, and dried with a hair dryer.  The girls either put their hair up for a little bit, or took a shower right away.  Even without the sugar in the Kool-Aid, the hair was sticky, so you will want to wash it (also so that it doesn’t get on furniture).

The first time you wash the hair, a lot of dye washes out.  It doesn’t seem to lessen the color, but we wash until the dye isn’t coming out any more.

You may also want to make sure the hair is dry before bedtime, or set down a towel over the pillowcase, because my daughter’s pillowcase had some pink stains on it from the first night of going to bed with damp hair.

The intensity of the color depends on the color you choose, as well as the hair color and type. 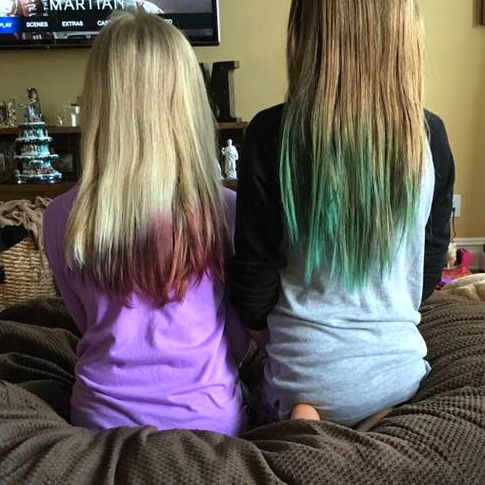 Take for example, my blond-haired daughter.  I had lots of people tell me that the color would wash out in about 6 weeks.  I never believed that would be the case – and even being in the pool 5 days a week during the summer, there was still a trace of purple at the 6-month mark!  The agreement from the beginning was that if we needed to cut it off, we would. 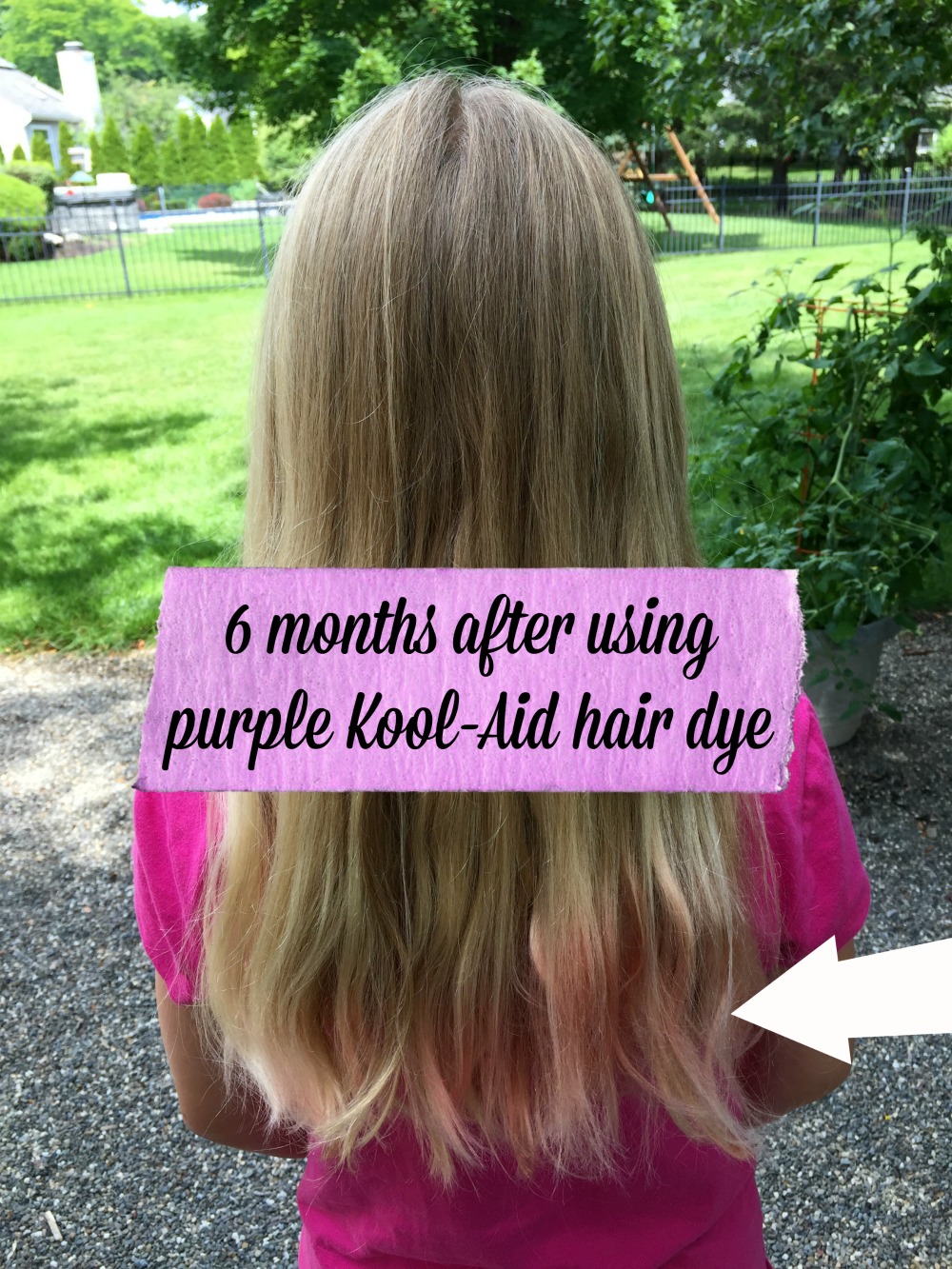 I have heard there are methods to help remove the dye, but we have never tried them.  Interesting how being in the pool outside every day, with sun and chlorine, didn’t remove the dye either!

Notice the difference between the red dye on blond hair, and the blue dye on brown hair.  Some dyes are less vibrant – like the blue – so combined with the brown hair, the results were very different.

While the red was very vibrant and lasted much longer, it did begin to fade with every washing.