My kids love exploring, and we love taking them on different adventures.  After checking out some other gem mines, we decided to try out the Garnet Tours at the Barton Mine.  They are located in North River, in the Adirondacks of Upstate New York.

The hardest garnet in the world is only found on Gore Mountain, making the garnet extremely rare.  The Barton garnet has an unusual and beautiful ruby red color that flashes in the sun.  In 1969, the Governor of New York, Nelson Rockefeller, made the Barton garnet the New York State gem stone. (www.garnetminetours.com)

Our drive took us north to North River, New York, finally turning on to Barton Mines Road.  There were a few times I was positive we had made a wrong turn or we had passed the mine, as the road is unpaved and a bit rough in spots.  However, my minivan made it up the mountain and you can’t miss the Gore Mountain Mineral Shop building on your right hand side.

The main building is mostly a gift shop, but is also where you pay for your tour.  I would recommend having the kids use the bathrooms at the mineral shop before the tour starts, and bring sunscreen (there won’t be much shade, if any at all).

When the guide is ready, you follow in a caravan of cars just a little bit up the road to the mine.

The mine itself is like a quarry, and is very pretty, with bright green water surrounded by walls.  The mine is easy to walk around, and you park right next to it, so it is easy to navigate. 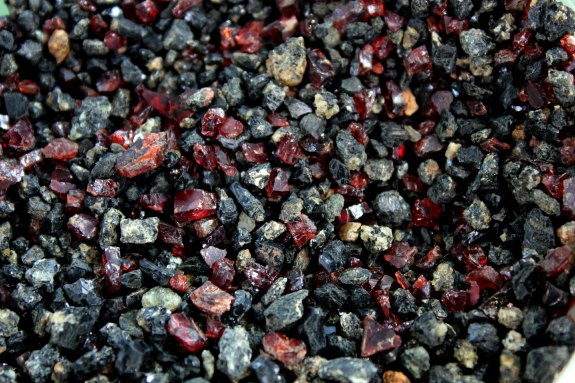 Our tour guide gave us a history of the mine and information about garnets before we actually went to look for garnets.  The kids weren’t interested in the speech, but my husband and I did find the history of the area and the information on garnets interesting.

Once the guide was done, we were provided with some different tools to share as a group, such as buckets and sieves or colanders, and our tour group headed out wherever we wanted in the quarry. 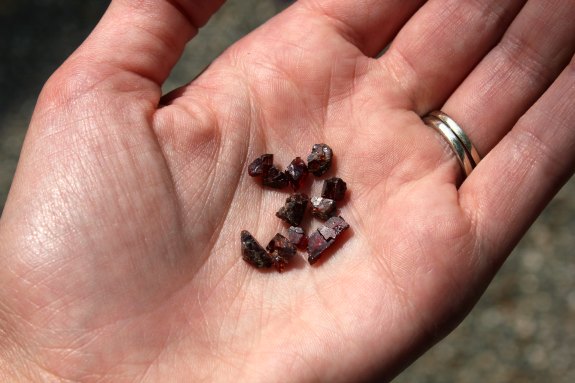 My kids had a lot of fun looking for garnets.  You don’t need any special tools, such as pickaxes or hammers, because there is so much loose rock and garnet.  The sieves and containers were is good for getting a scoop of materials wet so you can easily see the garnet shining.  You may want to bring small shovels (like a garden trowel) to dig with, especially for the kids (but we didn’t feel that we needed them). 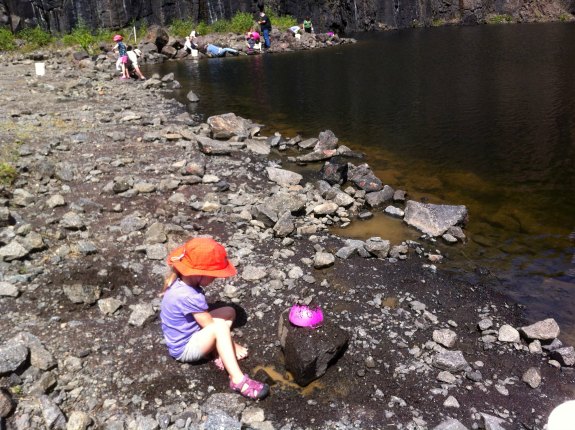 The garnets are small, but in abundance.  You can’t miss finding garnets, and I would say our bigger ones we found were about the size of a pea. 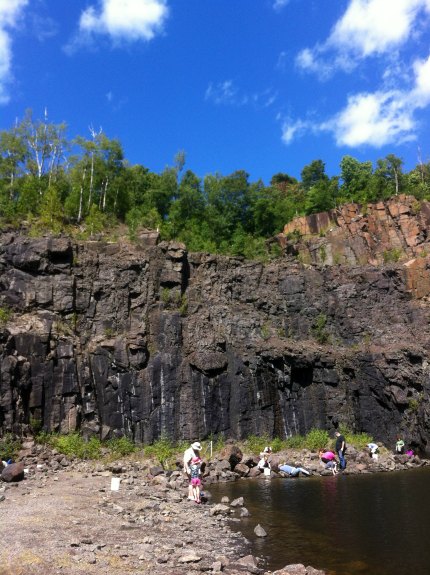 We collected quite a few while we were at the Garnet mine (these are just a few that took just a minute to collect).

You are given a limited amount of time to explore the quarry/mine area before following the guide back to the mineral shop, so use your time wisely.  I believe we were there for 45 minutes to an hour.  And once you pay for a tour, you get a season pass, meaning you can return as often as you like and take more tours to spend time in the mine.

Overall, we had a great time at the Barton Garnet Mine.  I thought the tour was interesting, and we all had fun looking for garnets.  This would make a fun day trip from Lake George or an interesting place to stop if you are traveling in the Adirondacks area.