A Flapper was a young woman who embraced independence from conventional by putting on short clothes and cropped hair. Flappers came up with many headpieces that were used to cover the head. The name flapper was in use even before it evolved to be associated with this autonomous young woman of the late 1920s inspired to dress suitably in the 1920s dress fashion. Roaring twenties women were slim and did makeup as they straightened their hair with head wraps. They enjoyed attending the Great Gatsby party with their flapper dresses, headbands, and 1920s accessories. All these 1920s fashion flapper dresses and headpieces acted as a fascinator.

Feathers were used to wrap the head on occasion. Black feathers are what women like to cover their heads. Black feathers signified the women’s social status and gave her pride. Feathers made women glamorous during these occasion’s appearances. Looking nice was every women’s desire, and after getting the feathers, they looked nice. During dances, they would shake their head, and the feathers would move. It created a unique pattern during dances. Some women in communities could put on a big feather to communicate to others that they had a higher position than others. 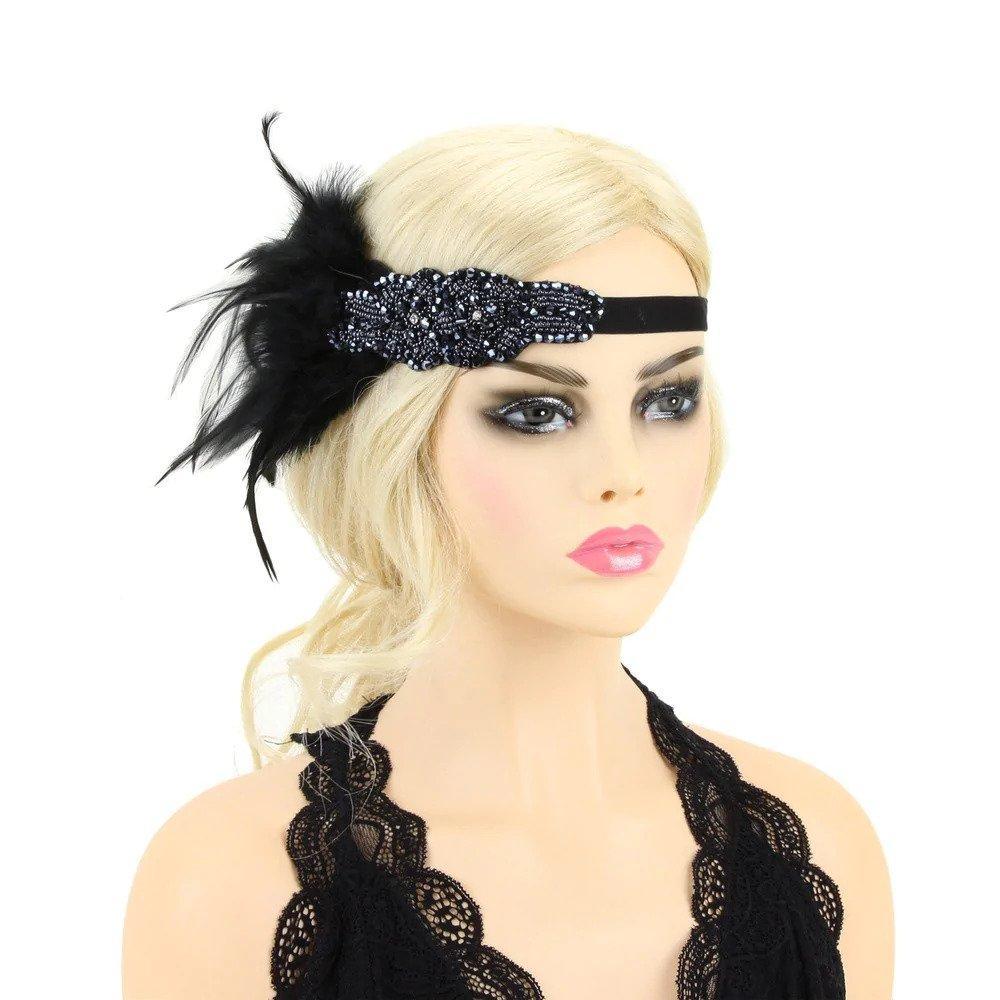 Pearls acted as New Years party headpieces. Also, they were used at ceremonious wedding parties. Pearls were used by sprinkling them on the hair to make beads pattern. They made a woman pattern and ensured she had a crown in every event she went to. Just as it is in today’s norm, women dress up and do their hair while going to a party. Flapper women felt the need to dress up while attending New Year parties and wedding ceremonies.

Women with Pearls on their strands looked beautiful, and their husbands were proud of their women after they put on the headpieces. New Year head accessories depend on the party’s theme; the music would be communicated earlier so women could have enough time to prepare their headpieces. Pearls looked even more beautiful after time was taken to create them into beads.

The headscarf was among the elegant 1920s headpieces that the flapper women came up with to aid their general look if a woman had not plaited their hair. Headscarf acted as a substitute to complement the look. The headscarf came in different knots depending on the occasion. Women were trained to tie them differently in glamorous styles. In most cases, the headscarf matched well with a flapper dress and confidently brought out the outstanding woman.

Women loved elegant 1920s headpieces, for they communicated their sense of fashion and how they would like to be treated. The headscarf was more durable than any other headpiece. One was to put it on for some time, and when they got dirty, they could be washed and tied again, unlike other headpieces that were quickly worn out like the feathers. They could just be used severally and lose their texture. Whenever a headpiece lost its texture, it could no longer look glamorous and needed replacement. Flapper women preferred headscarves for their durability.