Giving People Choice – The Role of Innovations in Disability Aids

Disability aids assist people with physical and cognitive inabilities to overcome their limitations and restore their lost abilities only to some extent, but never can they do their work as an average person. After all, disability aids also have its limitations in emulating the complex real-life activities. The products designed for people with disabilities are functional, no doubt, and aid them in achieving some of their goals of independent living. If a person suffers devastating injuries, it becomes tough, if not impossible, for him or her to perform everyday tasks. Similarly, for someone in a wheelchair, a small step is good enough to block their way.   The needs for independent living are too many, and the traditional devices that aid people with disabilities are only enough to address some of the basic needs but not those arising from lifestyle choices.

Functionality is all-important for disability aids, but at the same time, as these become part of people’s lives, the need for proper styling of the devices also becomes essential. The considerations for matching functionality with style just as it happens when buying a new car, a pair of shoes, or a pen holds good for disability aids too.  Along with it comes new innovative products that allow greater scope for independent living for the disabled people by addressing more specific needs that define their lifestyle. For example, if a disabled person wants to fulfill their wishes of racing in a wheelchair, they can turn to an aerodynamic racing wheelchair, which made its appearance in an exhibition on Accessibility last year. 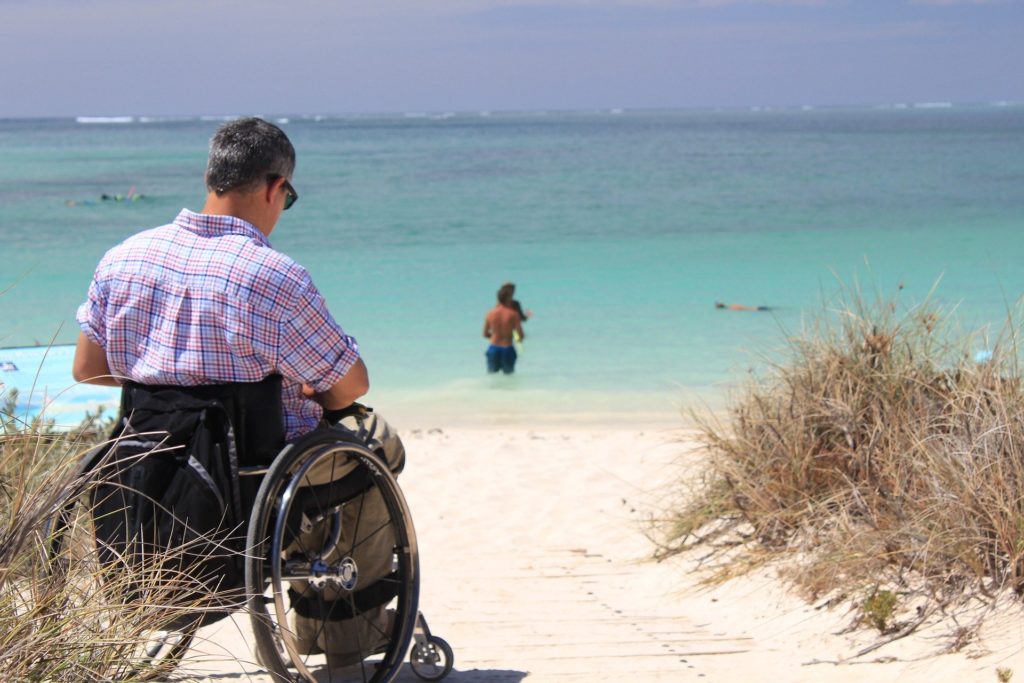 The innovations do not just focus on improving the functionality of the devices but also add a dash of style to it so that users can treat it as any other fashion accessories. As designers are creating products for those with disabilities with an eye on its practical and functional aspects, they are also trying to make it stylish. Product developers are now offering the option to dress up prosthetic legs by changing its color so that it matches the user’s outfit, taste, and style. One manufacturer has developed prosthetic leg covers that come in different patterns and colors, leaving it on users to choose the one matching their style as they would do when buying any other outfit.

The stylized products allow users of life-enhancing products to make the products their very own that bear their signature style like doing tattoos. Another such example is the development of jeweled hearing aids that look like stylish earrings. The looks of the hearing aid are quite deceiving unless someone comes close enough to discover that these are special as a portion of it inserts into the ear.

The scope is expanding

Manufacturers of disability aids like Disability Friendly assistive aids are now focusing on a wider range of disabilities as they shift their vision from physical disabilities to other types of disabilities like cognitive and sensory disabilities. Technological advancements and the development of digital products over the past few decades, as well as developments in neurosciences, are the reasons for the shift.

Los Angeles County, a place of significant diversity, a broad spectrum of tech abilities, and multiple languages commissioned a special voting booth for the 2020 elections that can meet the needs of different user groups at various ability levels. The versatile design of the voting booth makes it convenient for people who use wheelchairs to reach up to it and even reachable by anyone short. It comes in multiple languages, the ballots are electronic, and it has earphones for the hearing impaired.

Advanced devices – Imparting movement to the fingers and hand

A person who loses a hand or an arm cannot turn a doorknob even if wearing a prosthetic arm or hand. This is a fact we have all become used to. But this is now set to change, thanks to the innovations with disability aids.

A new kind of artificial hand is now a reality that can overcome the limitations in hand movement for people who have lost the use of the hand. Kyu Jin Cho, a mechanical engineer at Korea’s Seoul National University along with the team, has designed a glove made from a rubber-like material that is flexible enough to adapt various movements of the hand and fingers. The glove has three fingers that fit over the thumb, index finger, and middle finger of the wearer.

The fingers have wires that terminate in a motor operated by a simple on/off switch. On switching on the motor, it pulls on the wires to move the fingers for opening and closing the hand. As a result, people wearing the glove can grip objects. The name Exo Glove Poly underlines the use of polymer material for making the glove, and researchers have gone to the extent of designing gloves that detect nerve impulses from the arm muscles of users for controlling the glove’s motion. The glove is waterproof, which enables users to use it for washing dishes, too, and it is also easy to clean.

Spinal injuries are dangerous because they can paralyze limbs and impair the movement of legs and hands. In some severe injuries, the nerves that connect the limbs to the spinal cord or brain can snap.  It disrupts the communication between the brain and the limbs. When the nerves pick up a sensation of pain or the brain tells the limb to move, or the message does not reach the target. It is the observation of Ronald Triolo, a biomedical engineer at Cleveland, Ohio’s Case Western Reserve University.  His team is now looking to assist the healthy but inactive muscles disconnected from one another so that it is possible to make one or more muscles contract by using electrical impulses. By using just one electrode, doctors can generate a simple motion in an inactive muscle.

Triolo’s team has designed a device that can stimulate muscles in a precise sequence by using many switches that lead to coordinated motions of the muscles. By using electrical signals in the right sequence, it can stimulate the leg of a paralyzed person and generate motions that would be needed to pedal a bicycle.

The finding might not help paralyzed persons to ride a bicycle safely as they might not have the balance and have difficulty in stopping and getting off. But the device that drives their leg muscles might be good for designing a three-wheeled or four-wheeled bike to assist them. The device would also allow users to ride a stationary bike, which is a good exercise for increasing blood flow that would prevent wasting the knee muscles due to lack of use.

New inventions are spicing up the world of disabled people who are getting new aids to reduce the dependence on others for daily living. The new inventions promise a lot of freedom and opportunities to communicate and move around freely.  Let us look at some latest inventions that are set to change the world for disabled people.

Braille smartphone – Sumit Dagar is the creator of the Braille Smartphone with the explicit purpose of bringing the smartphone within reach of the visually impaired and blind people. The screen consists of a grid or pins that form characters and shapes when messages arrive, using the technology named Shape Memory Alloy.  The visually impaired can touch the pins to feel it and then read the message with touch. It is a departure from the earlier mobile devices for the blind that relied on vibrations, voice commands, squeaks, and beeps.

Sneakers for cerebral palsy – Nike has drawn inspiration from a 13-year old boy who has cerebral palsy who wrote to the shoe manufacturer about the difficulty faced in wearing sneakers on his own. This led to the development of a wraparound zipper system at the back of the heel that does away with laces, making it easy for everyone, including those affected by a movement disorder, to wear the shoes by themselves.

Firefly Upsee – Innovations in disability aids are happening at all levels, even at homes and not the sole prerogative of device manufacturers. Firefly Upsee is a simple but wonderful disability aid created by the mother of a child who has cerebral palsy. The device is a simple harness that allows children to strap themselves to their parents or caregivers so that they can go through the motions of walking, taking one step at a time.  The innovation of an Israeli mother, Debby Elnatan, is now available in the market that gives enormous hope to children with special needs around the world.

DynaVox Eyemax – The product meant for people with limited mobility does away with the use of hands for controlling the device. Instead, the device responds to eye movements, and you can give commands by just gazing at it in particular directions or by blinking. The device is useful for several activities like television viewing, operating a computer, reading, or even speaking.

New opportunities are coming up for people with disabilities to become as much equal as possible with the help of technology and innovative designs.