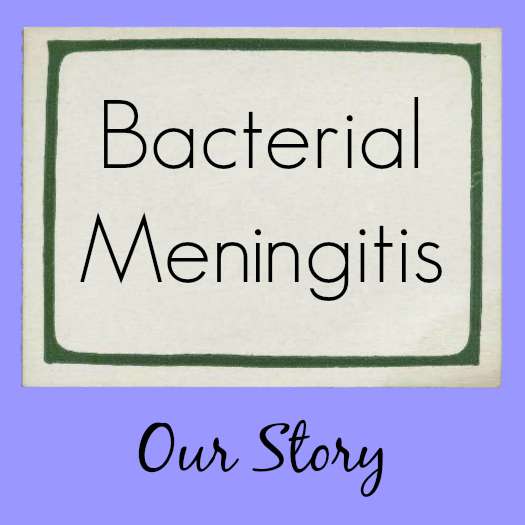 Bacterial meningitis isn’t really something I thought about when my kids got sick.  It didn’t really cross my mind, and most people aren’t very familiar with it.  But we went through a life-changing event when my daughter was 5.

My daughter had started Kindergarten that fall.  She was happy and healthy – she always had been.  But in February, she had not been feeling well and had several days where she stayed home with a fever.  She would go back to school, and then she would stay home sick again.  In March, she really wasn’t feeling well again.  Complaining of a fever, stomachache, and headache, we took her to the doctor for a strep test.  Just about all the kids in her Kindergarten class had had strep, and even her teacher and teacher’s assistant, so we figured the test would be positive, we’d stop at the pharmacy for antibiotics, and that would be it.

But the rapid strep test came back negative.  So that was that – we were sent home, told it was “probably one of those viruses going around”.

That was, in retrospect, the first problem.  Our doctor never sent out the culture for a full strep test.. because most likely, it would have come back positive.

For almost two full weeks, my daughter was in bed with a fever.  I took her to the doctor two more times, and it reached a point where I was calling the doctor’s office daily to check in.  Finally, sick with worry, we requested bloodwork, as it could be anything from Lyme disease to a virus.  From my own research online, my thought was that it was either viral meningitis or less likely, mono.  During our doctor visits, meningitis was mentioned, but the test for that is a spinal tap, and not something to be taken lightly – something that they thought was too big of a step.

After the bloodwork, I got a phone call.  Take your daughter to the ER.

I was dirty and tired.  My daughter had been in bed for so many days, I had been up with her throughout every night, and I was trying to take care of my 2 year old at the same time.  I grabbed a few things and threw everything in the car and got the kids buckled in.  When we got to the ER, I struggled to carry my miserable 5 year old, and it almost made me cry when the attendant told me he would park the car and that someone would carry my stuff – just go.  I was so thankful even in that moment.

The staff at the hospital worked quickly, taking our case very seriously – scary, but a relief.  They got us in a room right away and started asking a lot of questions.  My daughter had rarely been sick – she’d never even had an ear infection or strep throat!  Doctors started pouring in our room wearing masks and gowns.  My husband arrived as fast as he could, and the ER doctors first gave my daughter an IV because she had not been eating and was starting to show signs of dehydration – and then prepared for a spinal tap.  It was happening fast, and we had to leave the room and went back shortly when the procedure was done.

Soon we had our results: I was in shock to hear that it was bacterial meningitis.  I had been worried sick for weeks and we knew that is why the doctors moved so quickly in the ER, because that was their guess too.

Meningitis is an inflammation of the membranes (meninges) surrounding your brain and spinal cord. The swelling from meningitis typically triggers symptoms such as headache, fever and a stiff neck. Most cases of meningitis in the U.S. are caused by a viral infection, but bacterial and fungal infections are other causes.

The doctors immediately started giving my daughter antibiotics.  At this point we realized things were more serious than we thought.  Within 24 hours, bacterial meningitis will likely kill you.  If you are familiar with the Olympic athlete Amy Purdy, she lost her leg to bacterial meningitis as a young girl.  We were told how lucky we were that we got there in time, and how most of their meningitis patients are treated in the ICU, with irreversible damage.

My daughter spent a week in the hospital, recovering and gaining strength.  She could not be discharged until she could walk down the hall on her own.  Meningitis affects you in a way that causes you to curl up, and between that and the time spent in bed, my daughter had become weak, her muscles atrophied. 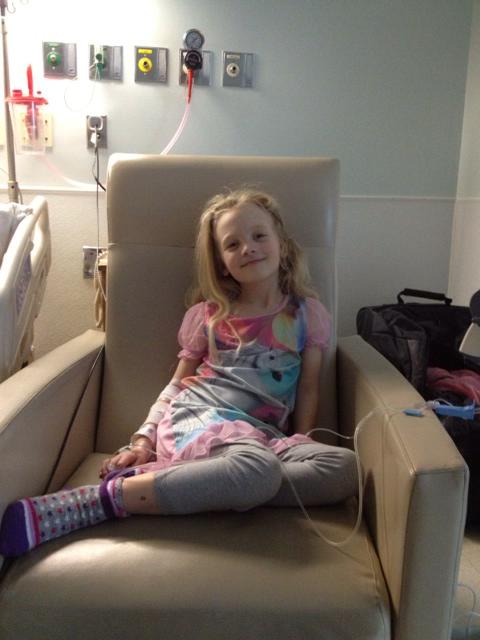 Feeling better after a week in the hospital.

She was discharged with a PIC line, which had to be surgically placed – a line that goes through your arm to your heart and you administer medicine at home.  For this, we were trained on how to work the PIC line, and a nurse’s aide also came to help and later remove the line.  Slowly she began to recover, happy to be home and the hospital experience behind her, and was looking forward to returning to school.  Her recovery meant gaining back a lot of weight, gaining back strength, and range of movement.  She was so happy to finally see her Kindergarten classmates after a month out of school.

We are blessed to have had a great support system.. school faculty and staff who went above and beyond for us, the many children who sent cards, parents who helped us out from running chores to stopping by with gifts or well wishes, friends and family who visited us in the hospital.  Every little thing was meaningful as.

The most likely explanation is that my daughter’s meningitis was a rare complication of having strep throat.  Although my daughter did not show the more typical symptoms, many people are carriers of strep.  Once my daughter was diagnosed, the rest of us were tested for strep and the test showed we were carriers, so we took antibiotics to decolonize us of strep (as a precaution, to protect her).

Today, my daughter is a happy, healthy 8 year old, and has no lasting issues as a result of having bacterial meningitis.