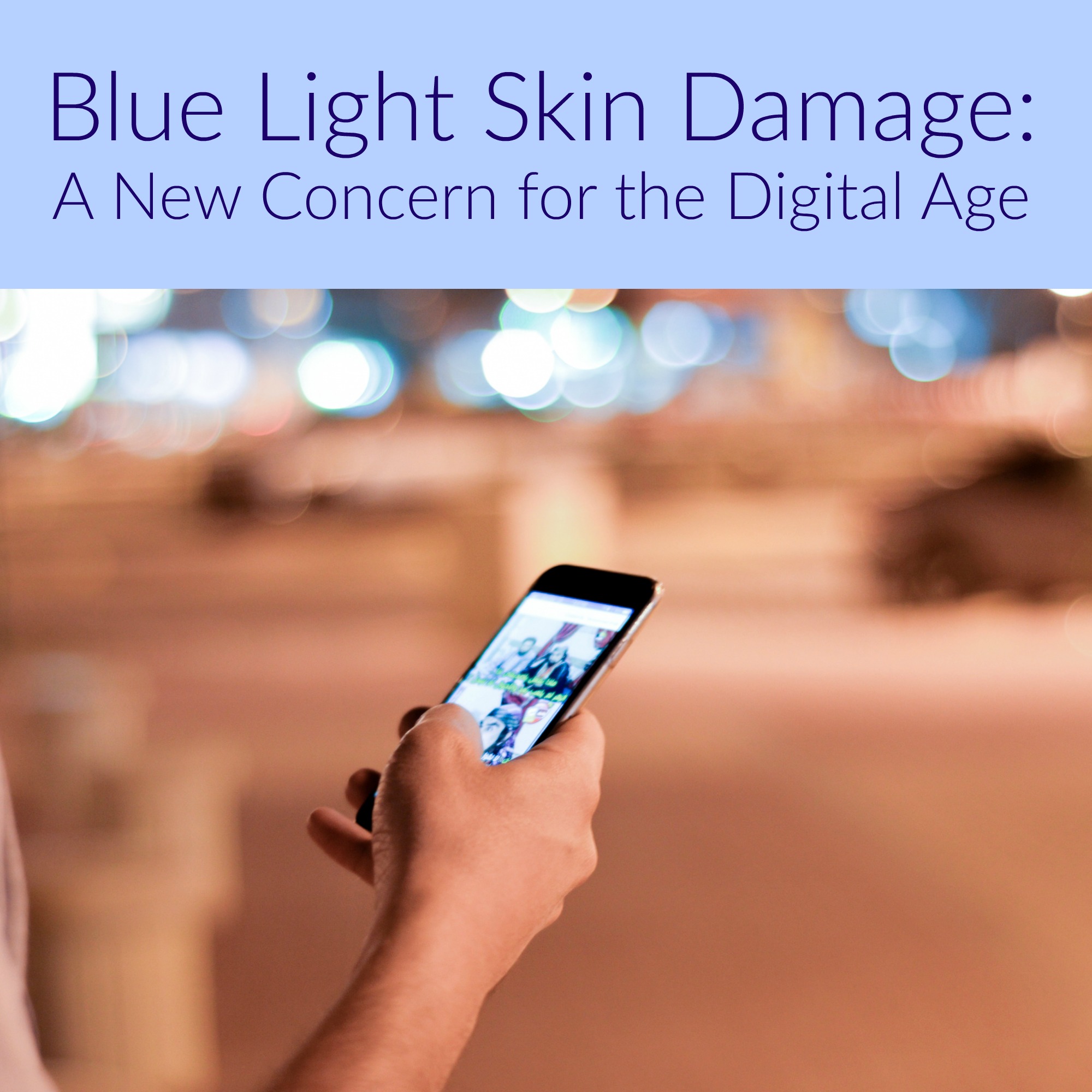 Another reason to be wary of excessive smartphone use: skin damage caused by blue light.

In a study at a university in Berlin, researchers found that blue light decreases carotenoids in the skin. This effect indicates the generation of free radicals in skin cells. This damage from free radicals often appears as dark spots on a person’s skin.

The conclusion of the study? Blue light could be causing skin damage from devices that emit high energy visible light (HEV), better known as blue light.

The history of public awareness of blue light dangers

Blue light has been studied and revealed to influence sleep patterns. The body’s biological clock (our circadian rhythm) that tells us when to sleep and when to wake can be disrupted through blue light at night. This disruption to a person’s sleep cycle has health risks that include heart disease, obesity, diabetes, and some cancers.

Also considered to be hazardous and straining to your eyesight, blue light may increase the risk of macular degeneration. Not to mention eye dryness, irritation, and headaches that result from too much time spent staring at a screen.

Now, there is another aspect of blue light that is concerning researchers and health professionals. Namely, the effect that high energy visible light can have on one’s skin. This acceleration of aging appears as fine lines, pronounced wrinkles, and hyperpigmentation.

For more info, you can check out this page here:

Causes for concern due to amount of exposure to HEV

In a Nielsen Company audience report, findings showed the average American spent close to 11 hours in front of a screen. This report did not include time spent on a smartphone or a tablet, as the survey covered only consumption of media.

With this constant exposure to blue light, even small increments of skin damage can accumulate to a considerable amount. Hyperpigmentation is not considered a serious cause for concern, but the result is often unsightly.

American Osteopathic College of Dermatology describes Hyperpigmentation as a “usually harmless condition.” This skin damage is described as patches of skin that become darker in color than the normal surrounding skin.

Treatments for correcting hyperpigmentation include prescription creams that contain hydroquinone. These bleaches can lighten or fade dark spots by slowing melanin production. Eventually, the spots begin to match the color of the surrounding skin. This process can take up to 3 to 6 months before improvement is seen.

Hyperpigmentation may not be considered a serious cause for alarm at present. However, the psychological distress of skin damage may result in depression.

Various beauty and cosmetics companies are responding to consumer fears of the damaging effects of HEV light. Concerned individuals can now look for products that mention HEV. Such products can expect to gain the same attention as those that are marked with protection from UVA and UVB rays.

Products now available include day creams that are designed to protect against blue light. Serums that are marketed to treat HEV-weary skin. Vitamin C serums to reverse and reduce hyperpigmentation due to HEV light. Eye creams and moisturizers are also part of an extensive line up that is now on the market, catering to those worried about skin damage from blue light.

Research on the effects of blue light is still in its infancy. And some dermatologists remain skeptical about the effects that HEV can have on skin. In the meantime, most skin experts are united in the importance of wearing sunscreen, both indoors and out. Many individuals are unaware that UV rays can penetrate glass. So sitting by a window exposes a person to rays that are proven to be harmful.

The habit of putting on sunscreen can be a difficult one for individuals to adopt. Particularly if it needs to be worn indoors as well. Some experts recommend associating the action a person wishes to adopt with another action that they already engage in. For example, always applying sunscreen when brushing one’s teeth. Thereby making it a part of the individual’s morning routine.

Another method for dealing with HEV or blue light that most can agree is needed? Stepping away from the TV, laptop, or smartphone. Doing so often involves physical activity, which is a proven way to boost health and stave off sickness.