What Does An Engagement Ring Symbolize? 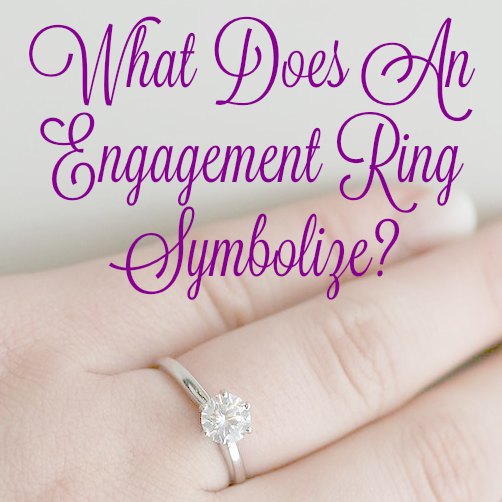 Engagement rings carry a whole range of different meanings for girls. Here’s a look at some of the traditional symbolism.

To every girl, an engagement ring is a symbol of devotion, fidelity, and love. The very design and shape of the ring has additional symbolism that many girls like to see incorporated in the design of the ring.

You may already know that the first diamond engagement ring was given in 1477 by Archduke Maximillian to Mary of Burgundy. Before that, engagement rings were either comprised of less expensive gems or plain metal bands. Today, the most popular choice for couples is solitaire, but other gems continue to grow in popularity.

At first, engagement rings may well have represented a part of a bride’s dowry. It served as an advertisement for her committed status, while the quality of the ring was an indication of the groom’s social standing.

It is thought that ancient Romans first began the practice of placing the ring on a girl’s left ring finger, as they believed there was a vein of love that was connected to the heart. In other ancient cultures, include Egyptian, also used this symbolism and today the tradition persists.

The Circle of the Ring

Engagement rings are circles of metal. That circle is part of a sacred and symbolic geometry. Circles do not have an end or beginning and therefore represent renewal, geometry, perfection and wholeness. They also symbolise the planet, moon, and sun, to bring together all life, just as an engagement brings two lives together.

During the second World War, when men left their partners, the practice of a double ring wedding ceremony became popular, particularly in the United States.  In this ceremony, the couple both receive wedding rings, where in earlier times only the bride would receive a ring. These days, most couples have double ring ceremonies and men’s engagement rings have soared in popularity. You can take a look at classy engagement rings in Melbourne CBD online if you want to get one for you and your partner too.

Another way to incorporate personal symbolism is to create engagement rings with birthstones. The gemstone rings use a birthstone to represent the bride and groom or a special date in their relationship, such as their first date.

Three stone engagement rings are imbued with personal symbolism, with every stone representing a different stage in the couple’s relationship, such as their past, present, and future. Three stone rings come in different shapes, but princess, emerald, and round are the most popular.

Another way to add symbolism to rings is to engrave them. Some cultures happen to believe that engraving the circle of the ring brings misfortune, as it will weaken the metal, but others feel that it adds a sense of intimacy and uniqueness and creates a stronger bond in the couple’s relationship.

However, you decide to personalize the engagement ring, there is no denying it has a myriad of meanings for girls. Whether you choose to honor traditions with a diamond solitaire, to give an heirloom ring to include the family, or purchase a completely new ring, the important thing is that the ring represents commitment, honor and love and that you will share for the rest of your lives.