Last year, we learned that Ariana Grande would be kicking off her Sweetener Tour in Albany, NY on March 18, 2019.  My daughter’s birthday is March 19th, and she wanted to see the concert, so I got her tickets for her birthday.

We bought tickets when they first went on sale, which I recommend doing because the ticket prices just kept going up.  When I checked ticket prices in February, the cheapest tickets were $153 a piece, so buy early.

The night of the show, we left with ample time for parking.  I parked a couple blocks away, as the parking garage prices were high and I didn’t want to deal with the closest lots and garages being jammed with people.  I have been to shows at the Times Union Center before (like Disney on Ice) that weren’t sold out, and the parking garage is always chaos.  Parking about 2 blocks away easily saved me $20, plus the hassle of the traffic.

We got in line around 7pm, and the line was already down the street in front of the Times Union Center.  The show wasn’t supposed to start until 8pm, and they weren’t letting anyone in until 7:30.  Fortunately, the line started moving and we were able to get out of the cold. 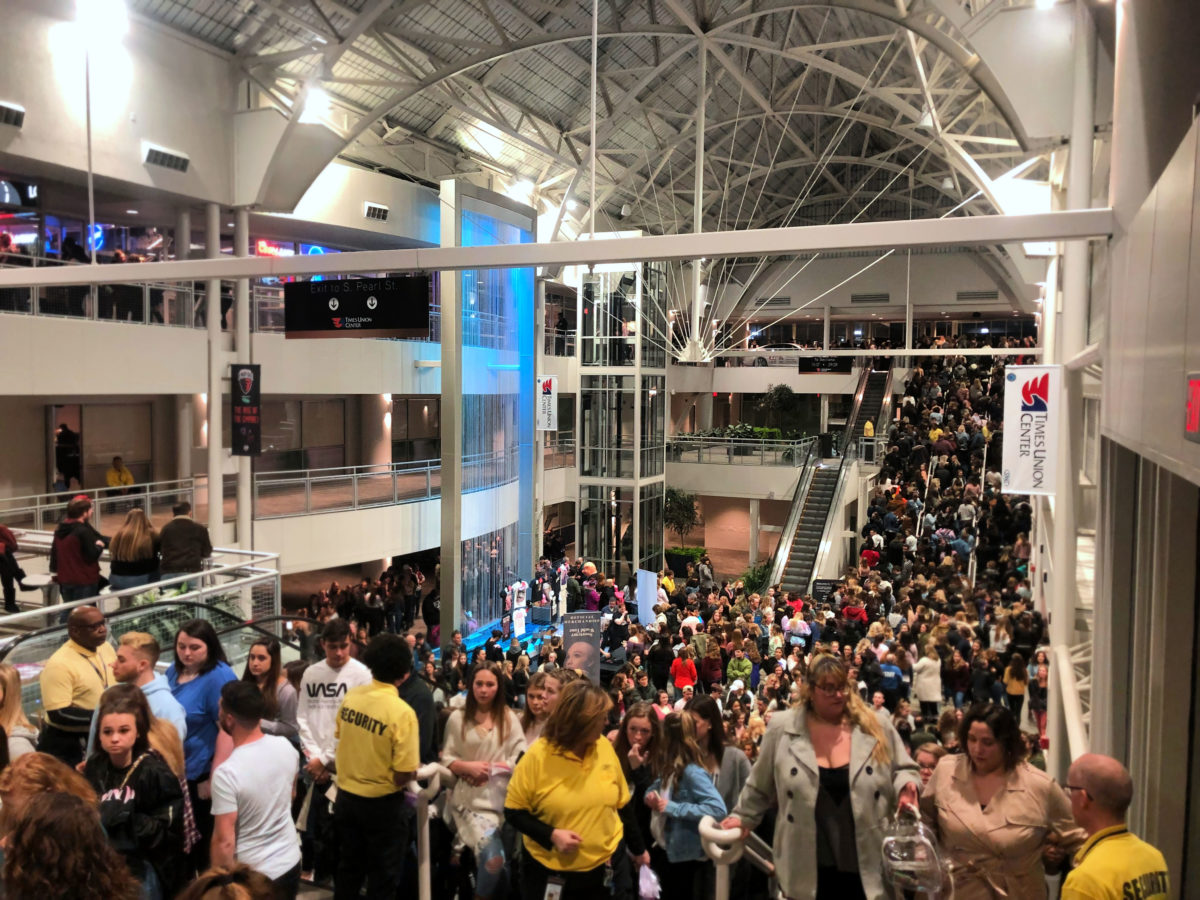 Security was tight as expected, with security staff yelling for everyone to get their arms over their head as we moved through the metal detectors.

Once we got into the Times Union Center, we grabbed a snack, checked out our seats, and went to buy a t-shirt. 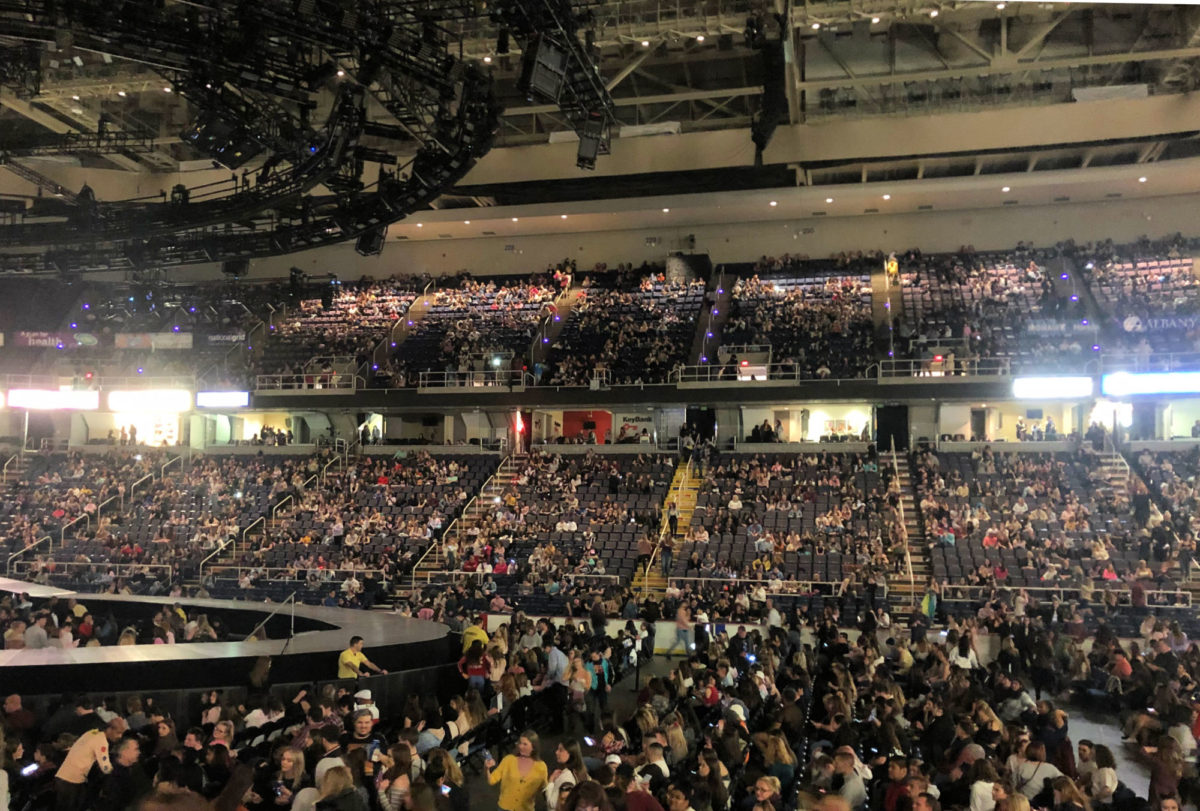 The Ariana Grande seats filling up before the show.

There were a couple merchandise stands and by 7:45, they were sold out of the one my daughter wanted.  Fortunately, there are a lot of choices and we were able to get one she liked (but be prepared that t-shirts cost as much as $60 each).

We got settled in our seats and just after 8pm, the first opener started (Social House).  They performed for about 30 minutes, followed by Normani, who was done by 9pm. 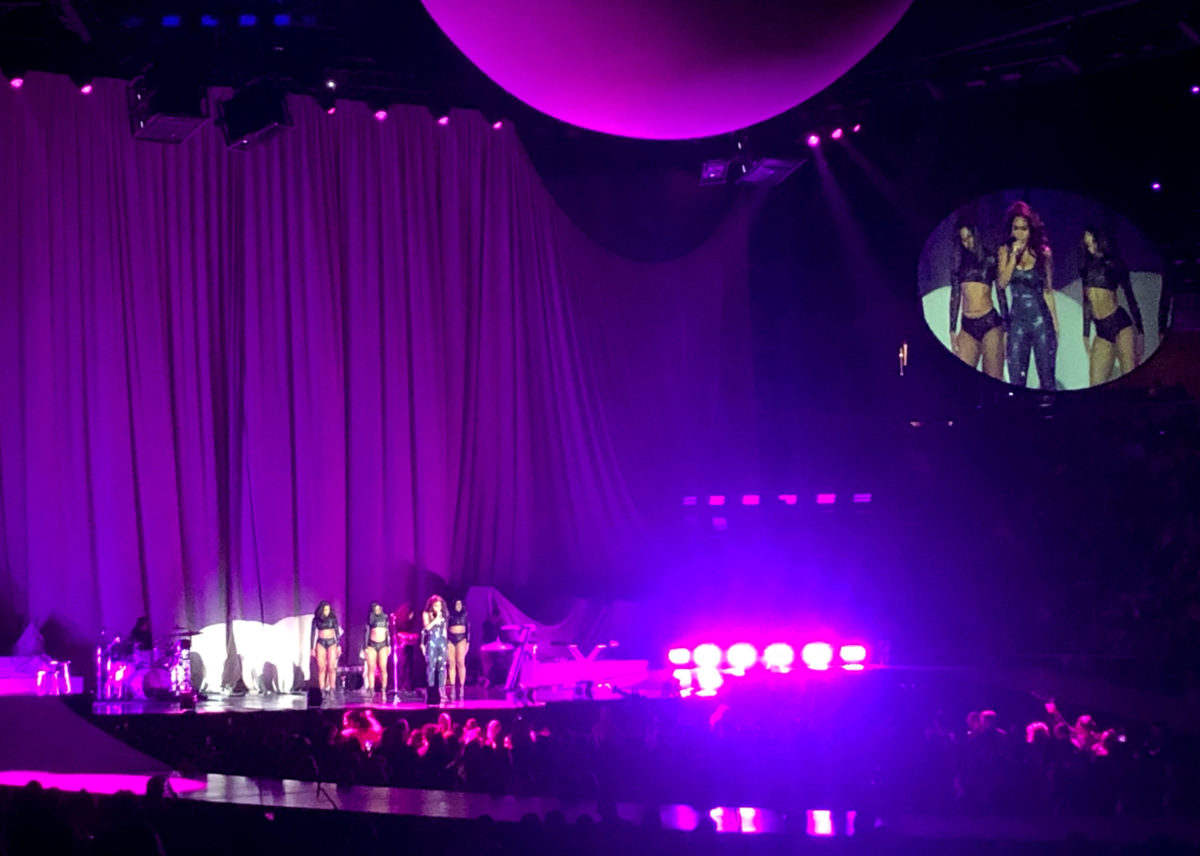 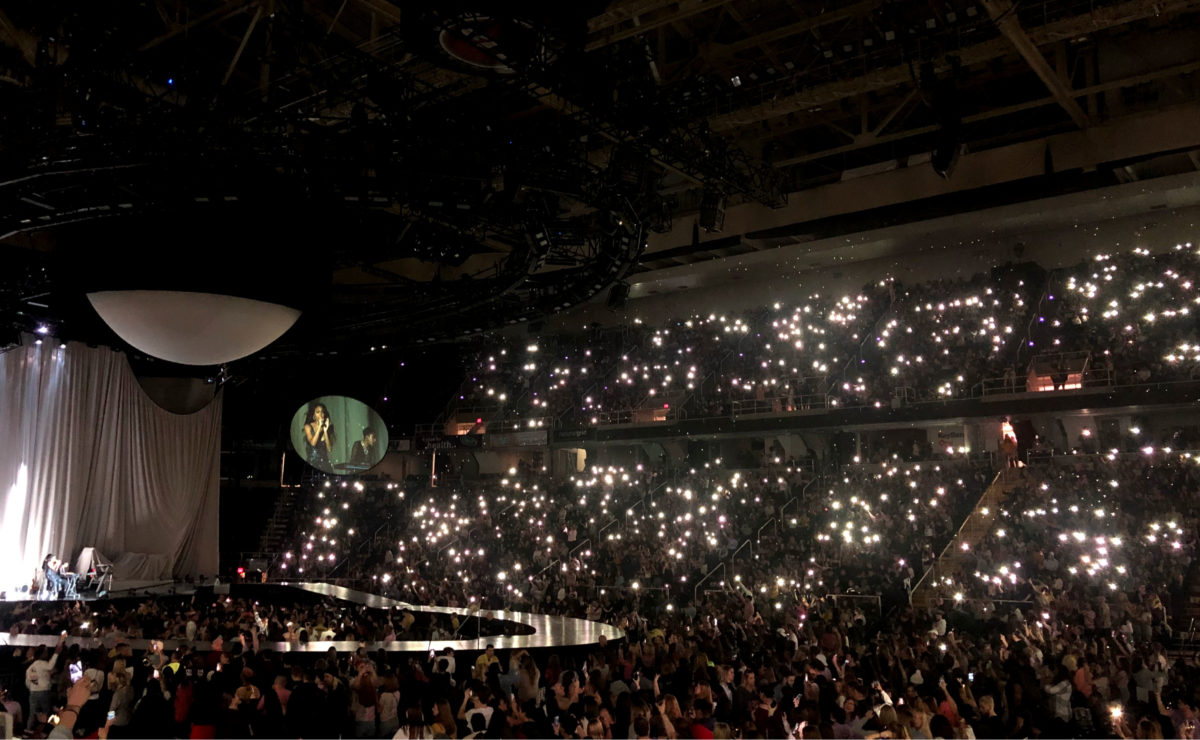 The tension was definitely mounting, and at 9:35 it seemed like the show was about to come on.  I believe this show was sold out, and the Times Union was packed with people. 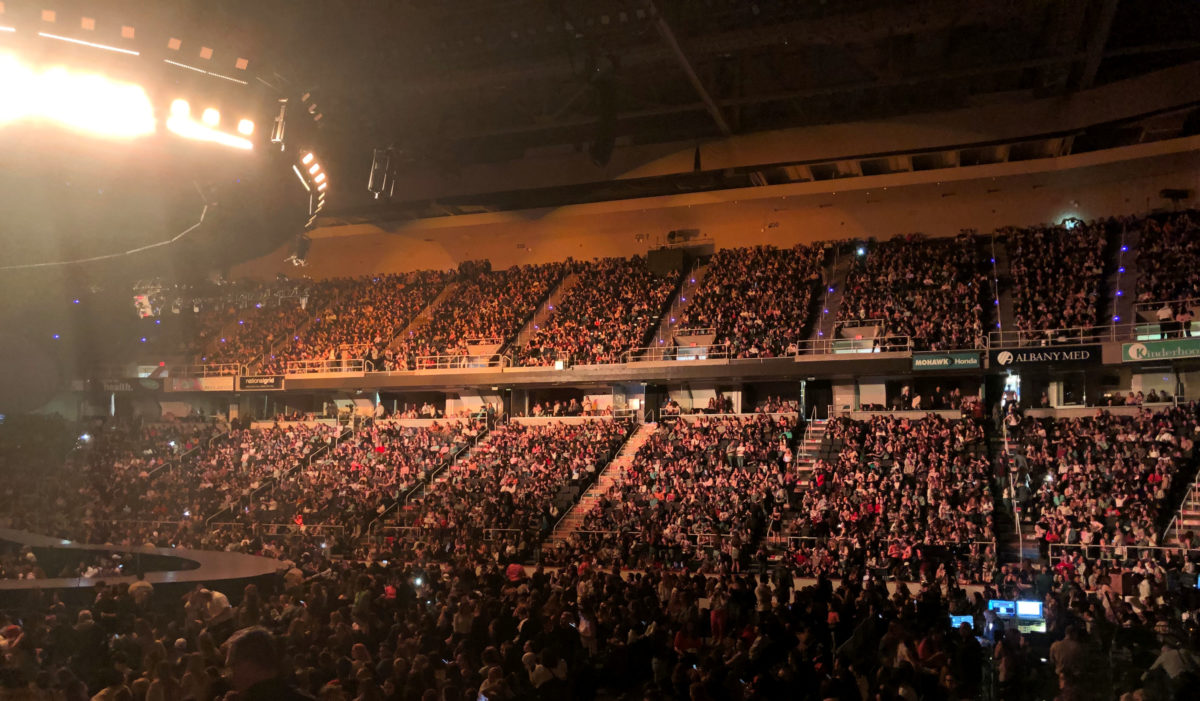 The set darkened and some music came on, and suddenly Ariana’s voice cut through and the audience was screaming.  The way the show opened was pretty cool, with a sun and moon coming together to create an eclipse, and then Ariana rose out of the floor. 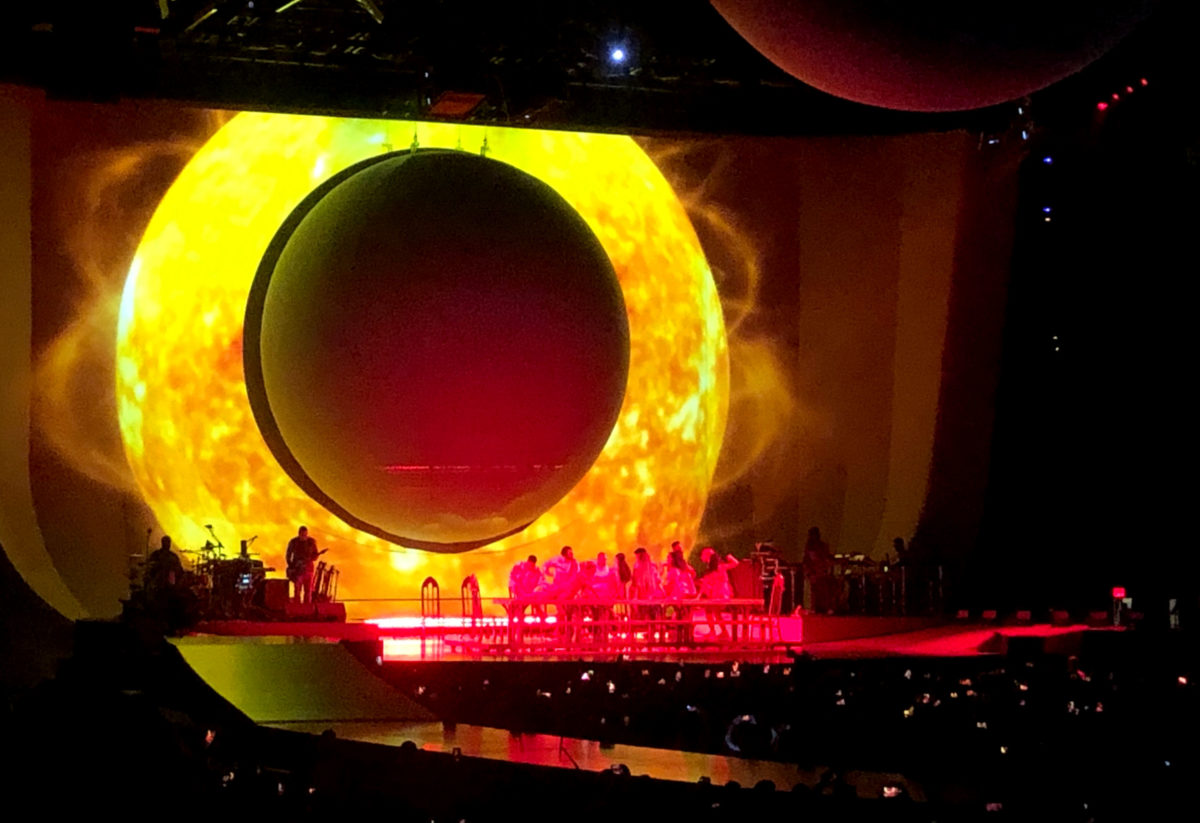 The set designs were all great visuals.  This set had a car with “Albany NY” printed on it. 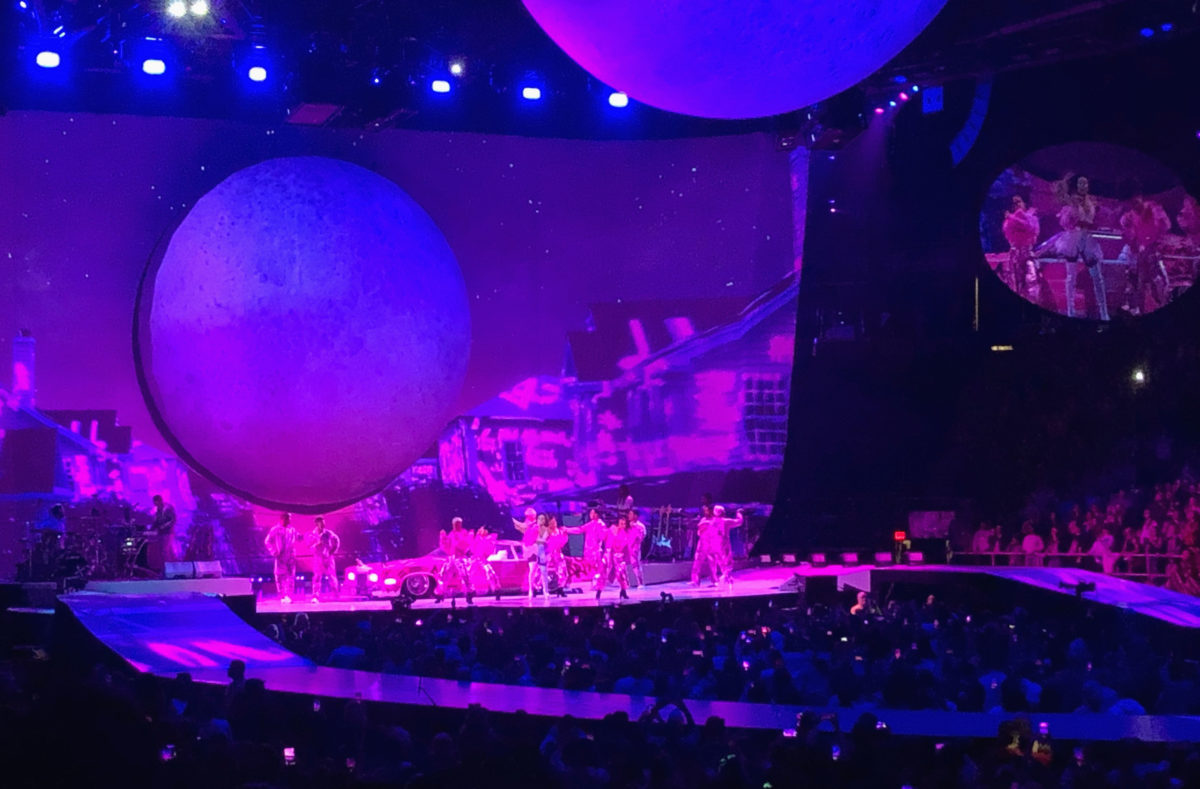 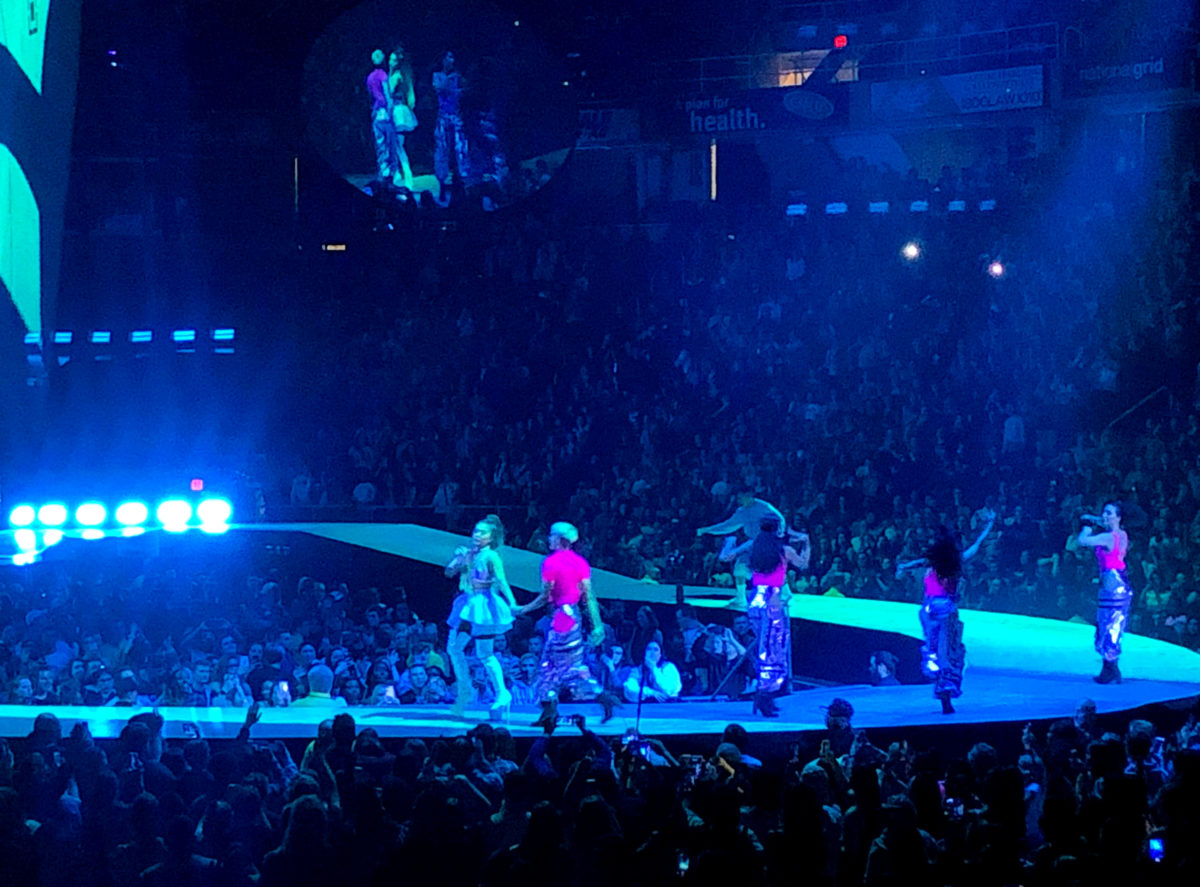 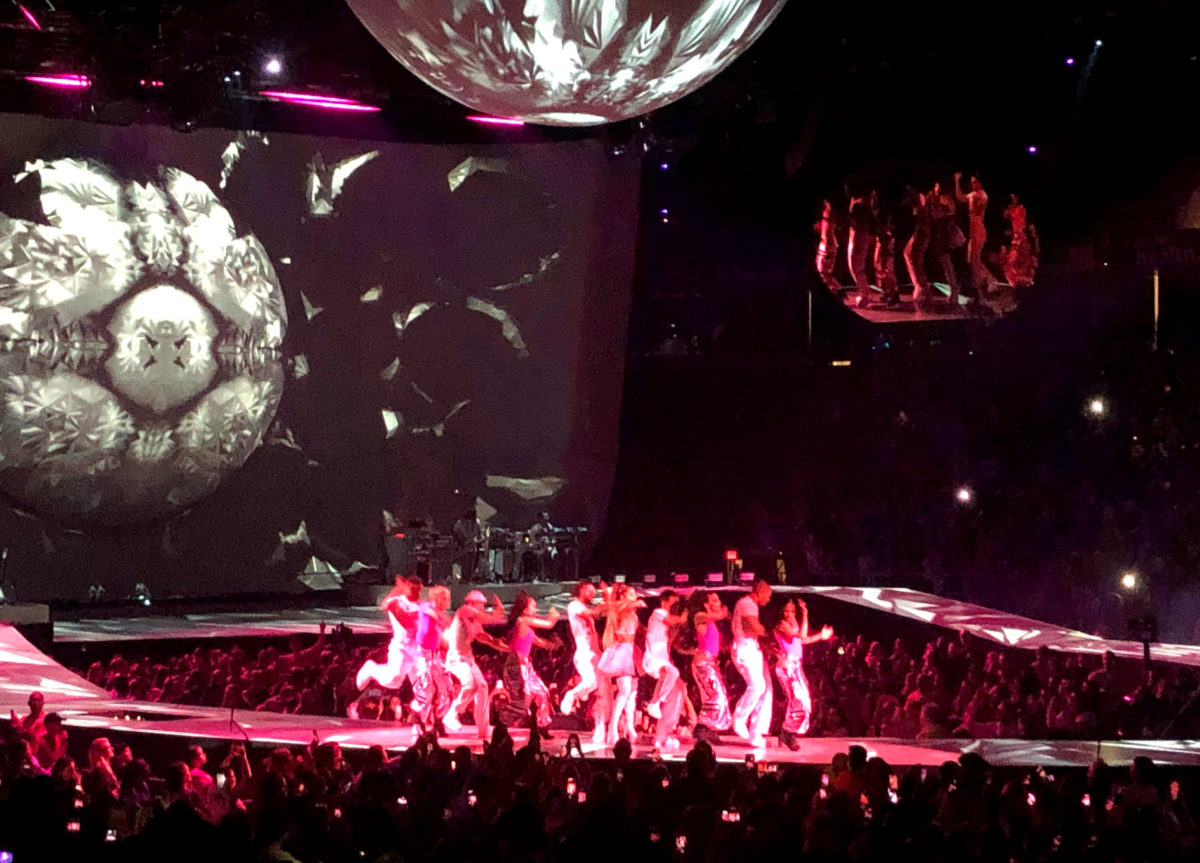 Here is a clip from the concert:

Just when we thought the concert was over, the fans kept cheering “Ari, Ari” and she came back on for an encore.  For her last encore song, she performed “Thank U, Next”, which was a big hit with the audience.  There were about 30 songs total (you can google to find the set list if you want to see what songs were performed).

The concert went until almost 11:30 pm, so it was a long night but nice that she performed so many songs.

Tips (especially if you are bringing kids):
~ let kids know that there will be security (there were a lot of scared kids, so it helps to give a heads up)
~ bring an empty water bottle for water or plan on buying some (it got pretty hot)
~ buy your tickets early to save money
~ merchandise is pretty expensive and sells out fast – you may want to buy online ahead of time to save money

Check out Ariana Grande at https://www.arianagrande.com/