What Are Tarot Cards and How Does a Reading Work?

If you’ve ever been to any fairgrounds, you may have noticed the lady dressed as a gypsy, flipping over cards on a table. You might’ve scoffed and passed the table by. Or maybe you thought it was interesting, but walked past anyway because you didn’t want to be caught interested in mumbo jumbo. 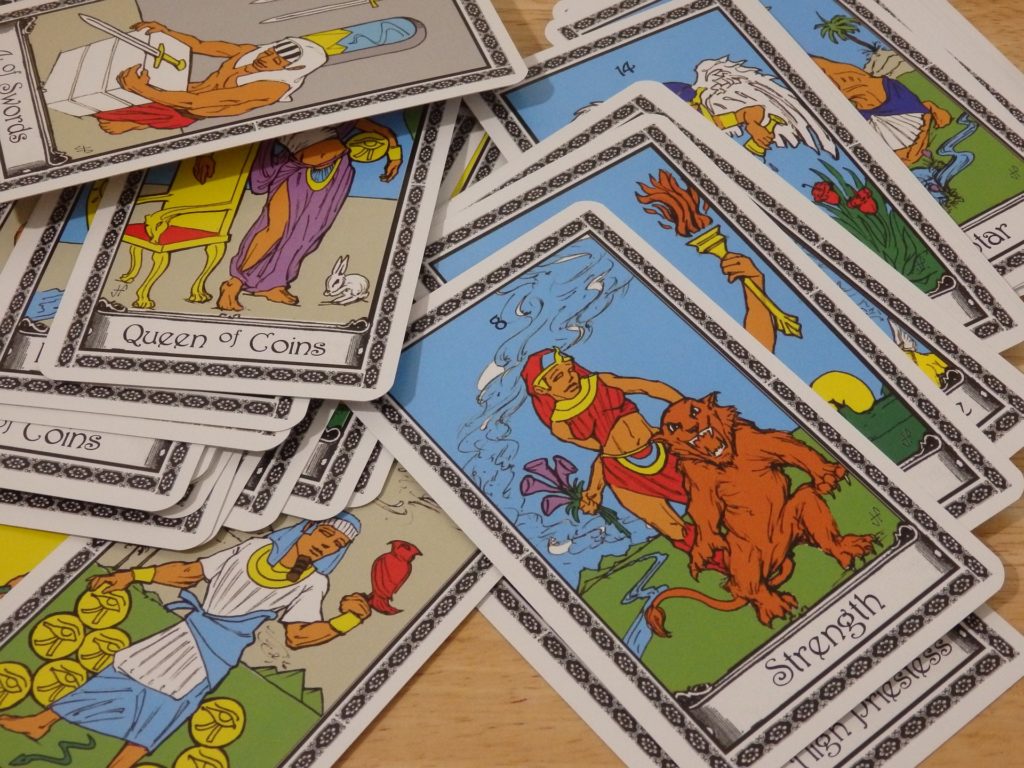 But your curiosity’s still piqued, and you’re dying to know what this card-flipping business is.

So what are tarot cards? What better way to find out than through the internet? We’ll answer this question and more in this article.

Before we discuss what tarot cards are, let’s first tackle what tarot is.

Tarot isn’t exactly a religion, but instead, a type of ancient divination. The earliest form of tarot probably dates back to the 14th century in Europe.

In the beginning, tarot cards were used in card games as a parlor game. Unsurprisingly, the different cards in a tarot deck function similarly to our modern card decks.

However, as time went on, tarot decks came to be used as divination tools. In the 18th century, the French Freemason Antoine Court de Gebelin did a thorough analysis of tarot cards. He came to the conclusion that the symbolism in these cards came from the secrets of Egyptian priests.

While there was basically no historical evidence to prove his points, de Gebelin’s writing was extremely convincing. Tarot cards became very popular with wealthy Europeans, which prompted the first deck of divination tarot cards to be produced in 1791 by the French occultist Jean-Baptiste Alliette. He even came out with an instructional book on how to use and read these cards.

What Are Tarot Cards?

Tarot cards are a pack of 78 cards that all have their own pictures and symbols. 22 of them are Major Arcana cards, while 56 of them are Minor Arcana ones.

Within the Minor Arcana tarot cards, you’ll find 16 Tarot Court cards. These are representative of the 16 personality traits every person can exhibit throughout their lives.

Also within the Minor Arcana cards, you’ll also find 40 cards that consist of 4 Suits that have 10 cards in each one. These represent potential daily situations we may come across in our lives.

What Do Tarot Cards Do?

What are tarot cards used for?

You might think they unlock the mysteries of the future, but you’d be wrong there. Instead, tarot cards are a medium that unlock your unconscious mind. For example, if you get a Suit of Wands in Minor Arcana, this can suggest that you should focus on growing your creativity.

As you can see, tarot readings aren’t intended to predict your future. Instead, they’re meant for giving you guidance, especially on important life decisions.

Because of this, different tarot card readers may have their own ways of interpreting cards, which is generally accepted in the industry. This is especially true when it comes to open readings (more on that below).

What Is a Tarot Reading?

You may have heard about people getting tarot readings. There are actually two types available: question and open readings. We’ll explore each one in detail below.

As the name suggests, in a question reading, you come with specific questions you want to be answered. For the best results possible, you shouldn’t prepare yes or no questions, but rather, ones that are more open-ended.

Do keep in mind that tarot readings aren’t meant to read the future, but instead, to provide clarity and guidance on whatever path you’re choosing or considering for life. For this reason, try to center the questions around yourself and try to keep an option mind when framing your questions.

They should also be focused, but not pinpointed on certain aspects or details of your life. In addition, your questions should be as neutral as possible, as well as positive.

On the other hand, you have open readings, where you don’t come with prepared questions. Instead, the tarot reader will just help you pull some cards and interpret them for you.

This means the tarot cards don’t have a fixed meaning. Instead, it’s up to the reader to interpret what the cards mean in context to their time with you. This includes the combination of cards that appear and what cohesive picture the individual cards make up.

Tarot cards work in the sense that they can help you reach within and find some clarity. Many people get the impression from fairs that tarot cards are mysterious things that hold some special powers and can predict what the future holds for you.

While many tarot card readers do perform readings like that, those are solely for entertainment purposes. There are plenty of other people that actually do take tarot readings seriously and use it as a sort of tool to get direction in their lives.

Get a Tarot Reading for Some Fun

Now you know the answer to the question “what are tarot cards,” as well as many other questions, such as “how does tarot work.” While it’s part of the occult and is considered a pseudoscience, it can be fun to do. Plus, if you’re wavering on a life decision, a tarot reading can be just the push you need to either commit or move on.

All in all, you should treat tarot readings as something entertaining. You can also treat it as a way to unlock your inner thoughts; just remember to take it with a grain of salt and to always use your better judgment, especially when it comes to important milestones in your life.

For more interesting articles, please take a look at our other blog posts now.