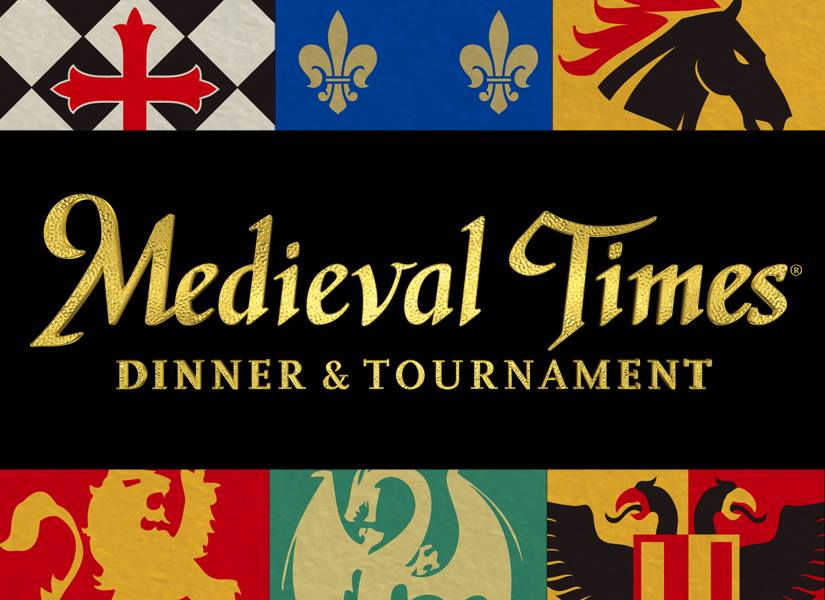 I received Medieval Times tickets in exchange for my honest review.

I have wanted to go to Medieval Times for many years, since my husband went a trip to Chicago and had a lot of fun over 10 years ago.  So now that our kids and 7 and 9, and we are a few hours from the Lyndhurst, NJ location, we decided they were a perfect age to go!

The trip was an easy drive, and soon enough, we could see the castle in the distance.  There are shows on Friday, Saturday, and Sunday, so there are plenty to choose from.  The castle was pretty busy for the 4:30 Sunday showing, but we found parking without an issue, and everything was efficient.  The doors open 75 minutes before the show, so you can get there early for pictures, merchandise, drinks, and more, without having to rush or worry that you will get there in time.

We got to the Medieval Times Lyndhurst, NJ location about an hour before our show, and as we checked in, decided to add on $2 tickets to visit the “Museum of Torture” to pass the time.  This is a “Dungeon” hallway of barbaric examples of medieval torture – yikes!  My girls are 7 and 9 and weren’t too scared.  It is interesting for adults too, and I found the items both intriguing and disturbing!  While there would be plenty more to see that night, the girls couldn’t wait to tell their friends the horrors of medieval torture!  (This is my youngest trying to look terrified!) 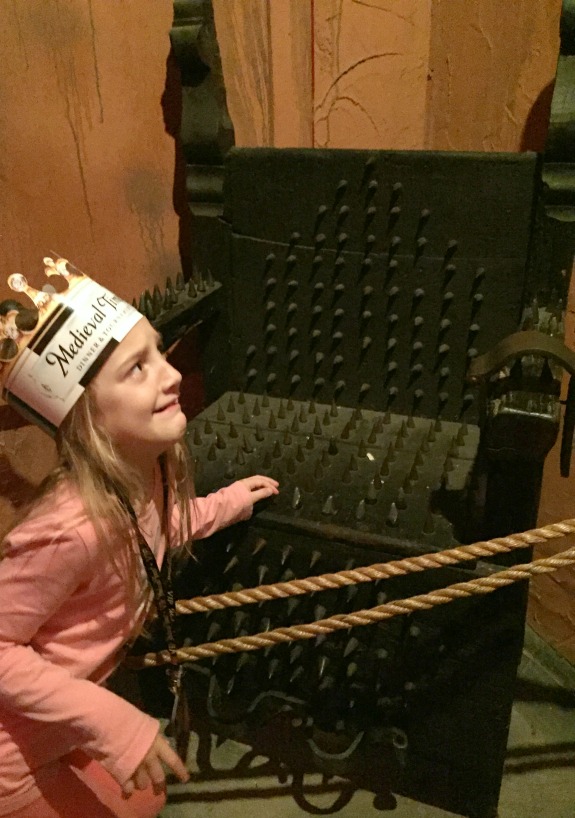 After checking out the medieval torture devices, we headed over to look at the Medieval Times merchandise.  We got both girls a banner to cheer on our team, as well as some other cool goodies like a light-up cup and a cute plush dragon.

Then it was time to head into the arena area to get ready for dinner!  We had no problem finding our seats, where we each had a towel with our team colors and flags to wave.

Soon, our server arrived to take our meal and drink preferences.  One of the really cool things is that they offer a vegetarian meal! 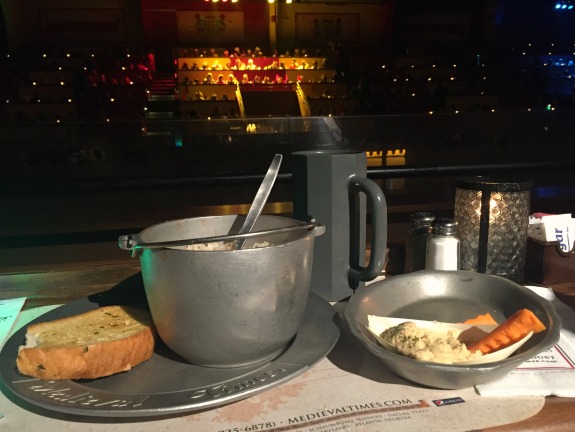 My kids and I are vegetarian, so this was much appreciated.  We started off with drinks and Dragon’s Blood (tomato bisque), served in a metal dish.  There are no utensils at Medieval Times (although there was an exception for our vegetarian soup for dinner), so we had to drink our Dragon’s Blood out of the bowl – which the kids thought was pretty awesome (both the tomato bisque and the lack of utensils!). 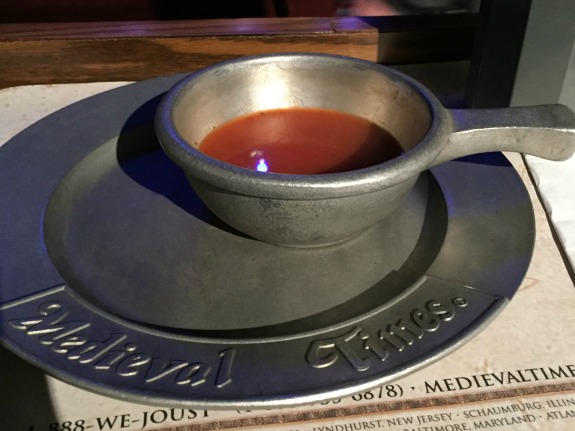 Our meal was served in parts, so that it was spread out over the two hour show.  We were really impressed by the show, which has much more than I was expecting.  The beginning starts out with some introductions, including narration and the king and queen’s arrival. 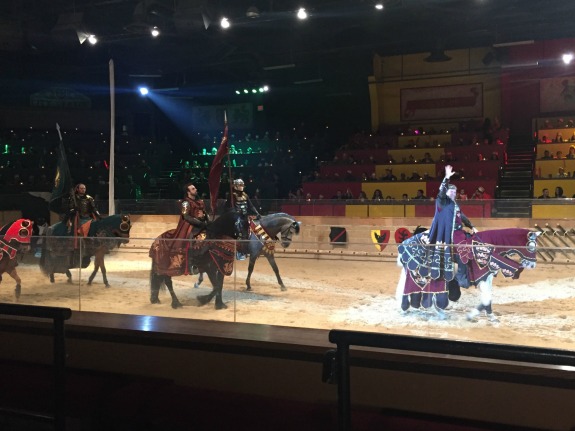 There were lots of neat things to see, like the Royal Falconer and Dressage.  I was impressed to even see a horse perform a capriole, which is a leap with a kick. 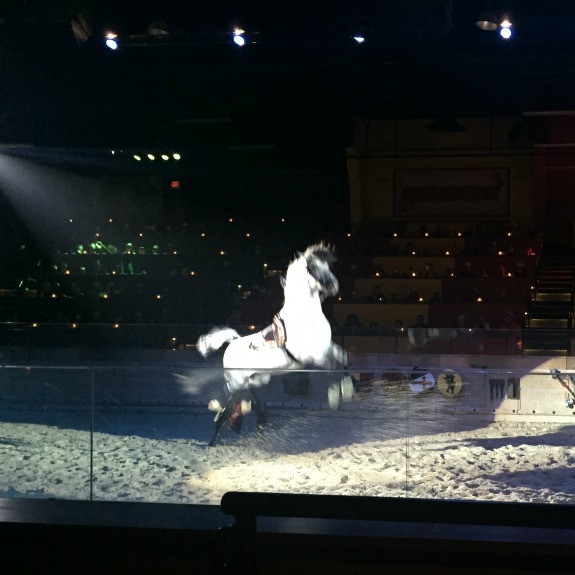 We were excited to see our knights come out, and to cheer on our knight for the Black & White section. 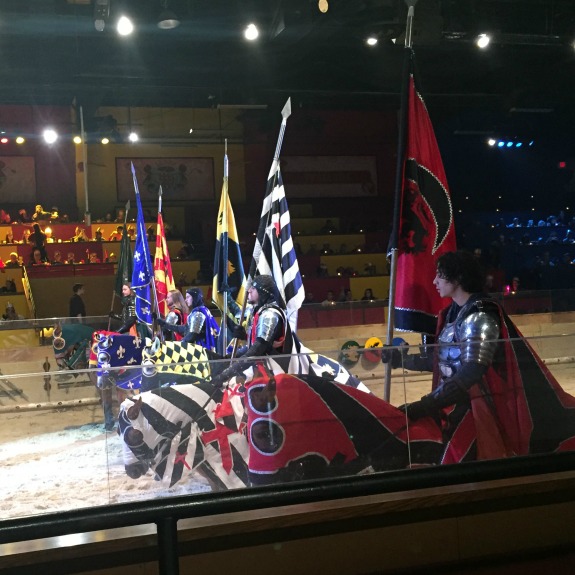 The knights did several competitions, such as racing, aiming a spear at a target, jousting, and finally one-on-one combat.  The competitions are very well done, from splintering poles during jousting to sparks flying from weapons as they clashed together.  The choreography was seamless and entertaining.  The knights definitely put their all into the performances, like when our knight leaped from his horse while it was running during a joust!

My daughter was very happy to receive a flower from our knight during the evening, as he had won a competition rewarded by a flower from the queen!  Unfortunately, in the very end, our knight did not win, and the kids were genuinely bummed that ours did not win.  No worries though, they were just really into the whole Medieval Times experience!

The show was overall very well done.  The kids never once complained they were bored, and were really into the whole experience.  The only thing they complained about was that they were hoarse from screaming and full from dinner! 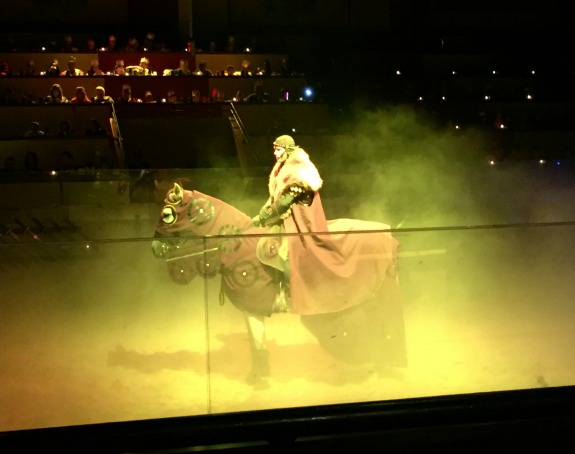 On the way out, we picked up the photos we had taken before the show, which was a nice souvenir to have.  Not only was the show quite enjoyable for the whole family, but the gift shop, souvenirs, dungeon, and overall facilities were all great.  I even was impressed with customer service, as I called on a weekend more than once, including changing our scheduled time, and the representative was super helpful.

I highly recommend Medieval Times!  Our whole family had such an awesome time and we have so many great memories from that night.  The kids are already talking about going back!

You can visit Medieval Times at http://www.medievaltimes.com/

There are 9 locations, so check to see if there is one near you, or next time you are on a trip!