Cooking Poultry Safely: Tips to Avoid Serving a Side of Food Poisoning 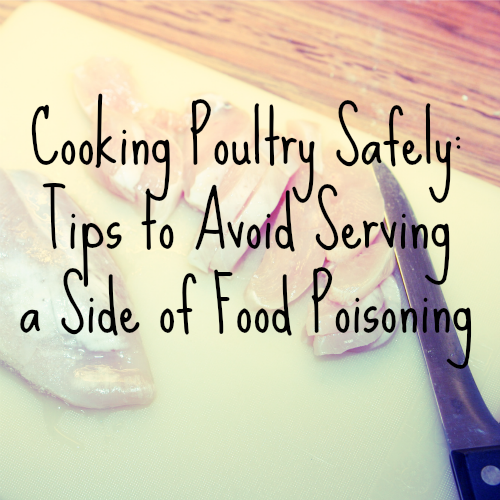 No one wants to be sick on Christmas holiday. And, ringing in the new year with a ringing in your ears isn’t much fun either. So here’s some food preparation safety tips to keep your food healthy and disease free this holiday season.

It’s common for people to stuff turkeys on Thanksgiving, but the practice also happens at some Christmas dinners – a practice that television personality and chef Alton Brown discourages because the stuffing attracts bacteria.

Most people who suffered from food poisoning during the holidays probably contracted a bug from the food they ate. And, they got poisoned because of cross contamination. In this case, what happens is that the turkey cooks, and juices from the turkey drip into the stuffing which is inside the bird.

Now, to kill the salmonella bacteria (which is usually what’s growing on turkeys), you need to cook the stuffing to 73 degrees. But, this means that you’re overcooking the turkey, drying it out.

If you really need to have the stuffing infused with drippings, collect them in the turkey pan, wait till the bird is fully cooked, and add them to the dressing afterwards.

And, always follow safe internal temperature guides for your meats.

Clean Everything Before You Begin

Cleaning everything before you begin – with soap and water. When you’re done, dry the surface off and give it a light spray of isopropyl alcohol. Let that dry. This will kill almost anything that could be living on the counter.

Now it’s safe to prep your food. But, you don’t want to just throw everything on the counter together. Start with one food group or type and move on the to the next, cleaning the counter between foods.

For example, if you start with raw meats, clean the counter before you prep veggies and fruits. This will cut down on the risk of cross contamination, and is one of the best food prep practices you can adopt.

Chill When Not Eating

This is the last, and possibly the most important, step. You should refrigerate food quickly because cold temperatures slow the growth of bacteria. Don’t overstuff your refrigerator, even if you overstuffed your belly, because cold air has to circulate in order to keep food safe.

Keep the fridge at a constant temperature of 4 degrees or below – it’s one of the most effective ways to reduce the risk of contamination and food-borne illness.

Use an appliance thermometer so you know that the fridge is being kept cool. The freezer should be -18 or below.

Refrigerate meat, poultry, and other perishables as soon as you get them. Never let raw meat or poultry or even cooked food or cut fresh veggies and fruits sit at room temperature for more than 2 hours before putting them in the refrigerator or freezer.

Never defrost food at room temperature. Food needs to be kept at a safe temperature during the thawing process. There are three safe ways to do this – in cold water, in the microwave, and in the refrigerator.

Elliot Barrett works as a registered nurse. He enjoys sharing his insights and experiences to a wide audience through blogging. His posts mainly appear on health related websites.